Nike Plans To Make The 2020 Olympics Its Most Sustainable Ever

If the fashion calendar is dictated by the assortment of shows that punctuate the year at increasingly short intervals, then that of sport runs on a slightly different time frame. Instead of resort runways or fashion weeks, there are world cups and tennis championships which offer brands opportunities to showcase their innovations. The crowning glory? The Olympics.

“Every four years, the eyes and the attention of the world stops and focuses on sports – which is fantastic for us,” explains John Hoke, Nike’s Chief Design Officer. “Sports show what’s possible, and [the Olympics] are a moment for us to telegraph our intentions as a company.”

For Tokyo 2020, Nike’s intentions read loud and clear: sustainability sits at the core of the behemoth’s future offering, both on its playing fields and in stores across the globe. It makes sense, if not simply because this year’s will be the hottest Olympics on record (the last time the Games were held in Tokyo, in 1964, they were shifted to October to adjust for the weather; in the 50 years since, temperatures have risen by over 1.4 degrees). Equally, while Nike’s Rio offering was characterised by its fluoro palette and the introduction of data-informed design, the global climate this year is more than just warmer.

“We’ve always been a company that wants to take a position on issues that matter – but there’s clearly a vibration, a zeitgeist shift that is happening,” says Hoke of the new era of politically-savvy brand engagement. “We don’t want to be passive; we want to lead the conversation… And it’s not a time to be timid – it’s a time to be bold, to dream big and to take action.”

It can often feel like a curious contradiction when enormous consumer brands advocate for sustainable change – but the reality is that they are likely the best resourced to do so. And, as customers seek out sustainable options in which to invest, they’re more likely to purchase them from brands they trust. On that note, the volumes we are talking about here are gargantuan: last year alone, the Flyknit technology Nike first introduced during London’s 2012 Olympics diverted one billion plastic bottles from landfill and turned them into fabric; for six years running, they have been the largest global user of recycled polyester in both footwear and apparel.

Now, to align with Tokyo 2020, Nike is introducing a new design movement – termed Space Hippy – which revolves around a zero carbon philosophy and employs methods such as making shoes with fully-recycled yarn uppers and cushioning them with foam scraps from factory floors. Amalgam plastic soles are left undyed – both to reduce the materials used and to visibly signpost a recycled-luxe aesthetic the brand is calling “rawthentic modernity” – and the entire range is as sustainably designed as Nike could conceive. “Space Hippy is the pinnacle expression of the palette of our sustainable materials – but they’re scalable across the whole company,” explains Noah Murphy-Reinhertz, Nike’s Sustainability Design Lead. “It’s a wild manifestation, but one that creates tools that everyone can use.” 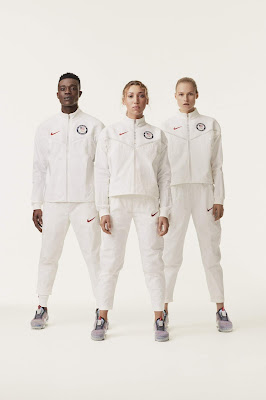 That new approach is of paramount importance. Sixty per cent of Nike’s carbon footprint is generated by the raw materials it uses, but now it is taking cues from the Japanese, who are creating their gold, silver and bronze Olympic medals out of nearly 80,000 tons of recycled electronics (including 6.21 million mobile phones). Accordingly, it is creating Team USA’s podium uniforms from recycled polyester and nylon patterned for near-zero waste, their emblazoned swooshes formed from reground post-consumer and industrial materials.

Elsewhere, there are skateboarding kits fabricated from recycled polyester; grey tracksuits made of 60 per cent recycled organic cotton. The soles of Nike Air shoes (which account for 50 per cent of all footwear sales) are being made in facilities that run on 100 per cent renewable energy, and scraps from the shape are fed straight back into creating new material. “We are using all the recycled materials that are available to us,” says Seana Hannah, Vice President of Nike Sustainable Innovation. “And throughout the manufacturing process, we’re using renewable energy, or the lowest energy methods possible.” Hoke adds: “We’re regenerating trash – and we’re designing as if the future of sports depends on it. Because it does.”

Such a missive doesn’t come at the expense of performance, though – after all, nobody is wearing a podium uniform if they don’t win a prize. While materials like Flyknit ensure nearly zero waste in production, Nike is also harnessing computer-engineered “generative design” technologies to optimise every step of a 4D avatar in motion when designing kits. That means that a computer can determine where an athlete most needs stretch or support, or where the breathability required by the Tokyo heat is best positioned, and create a knitwear pattern accordingly – one that is specified to an atomic level. The soles of trainers are tested using the same engineering methods as aircraft to ensure that, no matter the terrain they land on, they never lose traction. “One step is the difference between a gold medal and fifth place,” says Hoke. “And even the most subtle erosion is a distraction. We don’t like that – and nor do our athletes.”

Nike’s drive towards sustainability and its desire to support competitors in achieving peak performance in many ways go hand in hand. “We’re hearing from our athletes that climate change is changing how they train, where they train and when they train,” explains Hannah of the fact that some of their high jumpers have fewer days on which they can practise than ever before; that skateboarders are struggling with air quality; that marathon runners are regularly racing in the middle of the night to escape the heat.

“This is a pinnacle moment for us, and this is pinnacle product that helps us really sharpen our expression of how we’re meeting athlete needs. Plus, Nike can bring that athlete mindset to the conversation: it may seem insurmountable but this is a challenge we can meet.” After all, competition may be of paramount importance but, with the sustainability conversation, we only win if we all win.

What’s at stake is more than just a record-breaking Olympics: it’s literally the world as we know it. “We’re not the sort of company that wants to look backwards, or wants to fear the future,” concludes Hoke. “We’re a company who wants to create the future.” If they stay on track, it looks bright.

Posted by FASHIONmode News at 8:02 AM