Will Live Shows Go On In New York In September? Unlikely

Although IMG seems to be making plans to have physical shows during New York Fashion Week in September, as reported in WWD on Wednesday, most of the major designers contacted aren’t planning to have a full-blown runway show in New York. Most said they would do small presentations or show virtually.

In addition to Michael Kors and Marc Jacobs saying early in the game that they were not planning to show in September, Lauren said Thursday he was not planning a live fashion show during NYFW. Nor is Hilfiger, according to his spokeswoman. Ford, chairman of the Council of Fashion Designers of America, also said he wasn’t planning to have a formal fashion show, but is planning something digital, said his spokeswoman. Burch isn’t planning to do a live show and is still determining if she will do something digital, and if so, when, said a spokeswoman.
Gabriela Hearst has already said she plans to show during Paris Fashion Week, which is moving full steam ahead with a mix of physical and digital shows.

Meantime, Rebecca Minkoff said she is working with IMG to create a physical event during NYFW. While details are still being worked out and the location hasn’t been decided, she said the idea is not conducive to an indoor space. She is planning an outdoor event. She is working with Eyesight Fashion & Luxury, which has done the brand’s last two presentations. She said they can do the work remotely, and the casting and styling will be done in New York. Simultaneously, she will also do a digital experience.

Veronica Miele Beard and Veronica Swanson Beard, sisters-in-law and partners in Veronica Beard, told WWD, “We’re planning to unveil our spring 2021 collection during NYFW in September, but we won’t be holding a formal presentation or show this season.” While exact details are still being worked out, they said there won’t be any in-person presentation.

A spokesman for Badgley Mischka, said the designers are just starting to weigh their options and see what direction they want to go in September. Jason Wu hasn’t made his decision yet for September. Wes Gordon, creative director of Carolina Herrera, plans to hold some kind of in-person event during NYFW, but said it will not be for a large number of people. 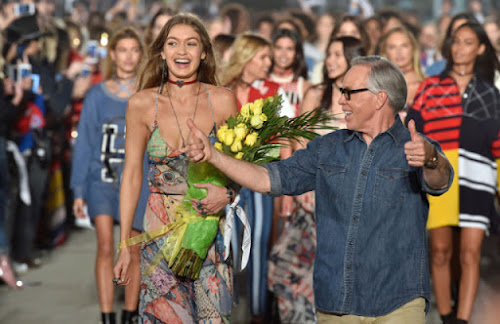 It appears that many designers are still figuring out their plans for September and told WWD they weren’t able to speak on the record about their intentions for now.

According to a spokesman for the Council of Fashion Designers of America, “The CFDA organizes the Official New York Fashion Week Schedule and therefore the official NYFW dates. As part of this role, we have been in communication with designers looking to show on the official schedule, which, for this season only, is set from Monday, Sept. 14 to Wednesday, Sept. 16. Of those, the majority is looking to present their new collections digitally, although some are considering small, salon-like presentations with 10 or less attendees.”

As reported last week, IMG, which owns and operates New York Fashion Week: The Shows, sent a deck to designers to gauge their interest in having a show during NYFW, which they say runs Sept. 10 through Sept. 17. They gave different options both on and off the official footprint of Spring Studios, outlining a slew of health and safety measures, and subject to government regulations.

At that time, Matthew Orley, vice president, designer relations and business development, IMG, told WWD, “We recognize the tremendous impact COVID-19 has had on the fashion industry in New York and around the world, and we remain committed to providing a variety of resources for designers during one of the most critical marketing and selling periods of the year. As we do each season, we are working closely with designers to determine their needs and how we can best support their visions. For September 2020, we have created a variety of new options that include live and virtual presentations, digital content and distribution, programming and experiences, which will continue to evolve based on the government’s latest health and safety guidelines.”

Reached for comment Monday, Fern Mallis, an industry consultant and creator of New York Fashion Week, said, “I haven’t heard about anyone wanting to do anything. I applaud them [IMG] for doing that [gauging interest], if they think they have people who want to do it.” In addition to the galleries at Spring, IMG is offering spaces on the Spring rooftop and two other venues at Pier 25. “Weather could be a problem and getting in elevators to get to that roof could be a problem,” said Mallis, although she heard they would be using the freight elevators. She said there were sponsors who were interested to stay involved and that’s likely the impetus.

Mallis also questioned whether foreign editors would come to New York to spend two weeks in quarantine. “Nor do we want anybody coming in from any other state right now. Yes, there are diehards, and fashionistas who will go to anything, I suspect. I frankly don’t think it’s going to happen.

“I just trust that the creative people will come up with interesting videos and digital presentations and we’ll learn which ones people like and which ones are working. I think anybody who thinks there’s really going to be any semblance of a fashion week is mistaken. People are asking me if I’m planning to stay out in the country through the winter? It’s frightening…I applaud them [IMG] for trying to do something but have no idea who’s going to participate. We’re living in a really bad science-fiction movie and the director’s terrible. It just won’t end,” she said.
Posted by FASHIONmode News at 11:03 AM