Pine Needle Pants? Cactus Coat? Discover the Innovative Textiles That Could Forever Change How We Dress

At the recent runway show for London College of Fashion’s master’s degree graduates, Canadian designer Stephanie Moscall-Varey—whose line is called Moskal—debuted an unlikely fabric concept. “I was researching mining because it had such close family ties, and living in Britain, it’s a big conversation,” says Moscall-Varey, whose previous designs derived influence from her upbringing in rural Ontario. For Fall 2020, she looked to her grandfather, who was a coal miner, and her father, a former coal power plant engineer, for inspiration. Her Pit Brow collection pays homage to the people who worked in the early coal mines and the hardships they endured, and it features pieces made from a material fashioned from charcoal.

Moscall-Varey’s textile innovation has a wide variety of environmental implications—including its biodegradability—and it couldn’t come at a more crucial time. According to a recent report published by the Ellen MacArthur Foundation, there were 53 million tonnes of fibre produced for clothing in 2015 and the equivalent of one garbage truck full of finished products either ended up in a landfill or was incinerated per second. The report addresses two key issues that continue to confound the fashion industry: How can creatives and businesses tackle more responsible creation of new materials to design with? And how can these materials be disposed of in a way that won’t further damage the planet?

Unsurprisingly, many are looking to nature for “ingredient” inspiration—that’s the term that has been adopted to describe what goes into the yarn and other components used in the fabrics our wardrobes are full of. From promoting the concept of a more circular manufacturing system to highlighting other potential eco benefits, answers to the question “How can we do better?” lie all around us. And now you can find them in places like Mexico, Scandinavia and right here in Canada.

Montreal’s Aldo Group is one of the first fashion footwear and accessories companies in the world to be certifiably climate neutral. A key component of this designation has been via the work of people like Karine Kicak, the company’s senior sustainability manager. Kicak spearheaded Call It Spring’s use of Bloom algae foam in its shoes, including this season’s chunky ’90s-inspired runners and sleek chambray mules. “Algae just naturally has the same properties as certain plastics that are used in foam or in a footwear outsole,” says Kicak, who is a chemical engineer as well as an expert in life-cycle assessment.

It’s important to understand that when it comes to better ingredients for textile creation, there are factors beyond how they are cultivated and the purpose for harvesting them; in the case of algae, removing it from where it grows actually makes the environment better after the fact. But how something is processed into its final stage is also something to consider. Kicak points out that Bloom’s technique for taking algae from nature to store shelves involves drying it using only the sun—instead of electrical heaters or chemical means—before turning it into the tiny granules that go into Call It Spring’s soles.

Many other eco-minded movements in the fashion industry are in the draft stage. Earlier this year, Finland’s Marimekko—known for its colourful print work on everything from clothing to home decor—announced its partnership with fellow Finnish company Spinnova to create a set of samples made from a post-consumer biodegradable wood-based textile. “This was a very meaningful union because it was early on for us,” says Emmi Berlin, Spinnova’s head of communications. 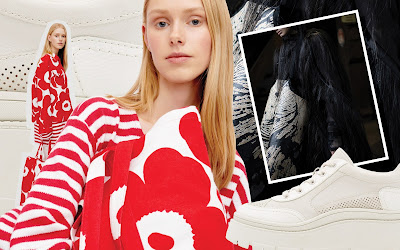 “Marimekko was really our first brand partner to advise us on what the fibre should be like and how we should even go about trying to create the first prototypes of it.” Saara Azbel, Marimekko’s sustainability manager, notes that the timing was right for the brand as well. “We have been working on developing more sustainable cotton, and we want to play a more active part in developing new sustainable materials,” she says.

Marimekko and Spinnova—and many other brands from the Scandinavian region—have become pioneers in the championing of earth-conscious design. Bonnie Hvillum, a material researcher, founded the Copenhagen-based Natural Material Studio after years of working as a systemic consultant. “I have a master’s in design but started doing systemic work as a way of approaching sustainability and regenerative futures,” she says. “I did a lot of consultancy for companies. Then I went on maternity leave with my second child, and I was missing that feeling of making a change in the world every day with my own hands. When you consult, you can try and influence people and advise, but you don’t really have that power to make the actual change.”

Hvillum began to develop a material made from pine needles—something Denmark has in abundance due to the country’s role in Christmas tree agriculture. “Fifty million trees are grown and cut down in Europe every year,” she says. Hvillum decided to look into possible applications for the seasonal refuse. “It’s a really strong fibre and contains natural oils; it has a lot of additives in it already,” she notes of the needles’ appealing qualities.

The mother of two also highlights that a major contributor to how brands function today, and how some initiatives are more well received by the public than others, is their narrative—like brands using materials from plastic water bottles and marketing them with pictures of barrier reefs and sea creatures in distress. The tale of how trees go from being a part of tradition to being used as a textile is a potent one, and Hvillum’s latest project has this storytelling element in spades. Over a year ago, she was approached by Moscall-Varey to discuss textile development and manufacturing, and after months of back and forth, Moskal was ready to introduce a charcoal foam composite fabric to the world at her master’s graduate show.

“It was a really beautiful process,” says Moscall-Varey about collaborating with Hvillum to develop the material, which has a neoprene meets leather-like feel and is biodegradable—and that’s the proverbial tip of the iceberg in terms of this textile’s merits. “I started looking into what charcoal is,” says Hvillum, who mined academic papers with Moscall-Varey for hints about what else the ingredient could do. “Activated charcoal is used in filtration systems. Could we use this as a filtering system in a fabric?” Such possible uses for the material were novel enough to afford Moscall-Varey and Hvillum an opportunity to present it at the sustainability-focused organization The Sustainable Angle’s annual Future Fabrics Expo in London in January of this year.

The widespread potential for new nature-derived fabrics is what’s now driving some material-manufacturing upstarts. Marte Cázarez and Adrián López of Adriano di Marti developed a leather-like textile made from the cactus that grows abundantly—and with low use of resources—across Mexico’s arid landscape. The two initially considered Desserto (the name of the material) important in improving the wasteful methods that exist within the fashion industry. Yet after visiting an Italian fabric fair, they came to realize that there are uses for it in the automotive, aeronautic and other industries as well. “It’s really interesting because we didn’t have that big idea that this material could be used in such ways,” says Cázarez. This May, Desserto won the sustainability award at Monte-Carlo Fashion Week, and earlier this year, it won in the materials category of the Green Product Award competition; these accolades bolster its position as one of the most exciting textile innovations in recent memory.

Whether or not someone sets out to revolutionize on a grand scale, those in and around the fashion industry will likely change more about our lives than any of us can foresee. And that’s what excites people like Hvillum. “It’s a really interesting time at the moment because people have started opening their eyes,” she says. Now it’s time to keep them fixed on the prize of a healthier planet.

Posted by FASHIONmode News at 10:49 AM