Is Your Jacquemus Chiquito Bag Actually A Cake?

If you haven’t heard of the “everything is cake” trend, prepare to be mesmerised: this lockdown fad trumps every banana bread and lemon drizzle in the land. As the name suggests, people have been led to believe that everything is, in fact, made of cake. And that includes your favourite handbag.

Earlier this month, videos began circulating of seemingly real objects being cut open to reveal that their insides were actually made of sponge. Pickles, bars of soap, a tattooed arm, a quilted toilet roll, a packet of Doritos – you name it – have been made into cake. It has spawned existential crises and compulsive viewing across the world. 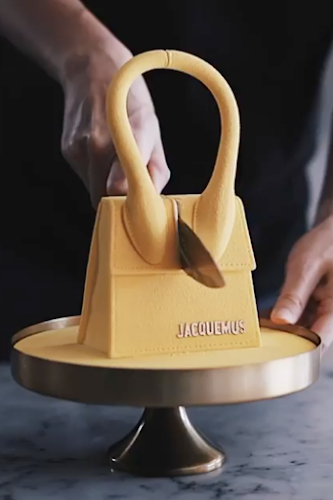 The trend appears to have hit critical mass thanks to a Buzzfeed Tasty video compilation of cake reveals, which began circulating in early July. This kickstarted a trend of people trying out their own deceptive delights. Thirty million people – and counting – have already watched the videos, so it’s high time you do too.

Beware: the trend might make you wary of your favourite handbag. Yep, even Jacquemus’s cult Le Chiquito bag has been cake-ified, thanks to Moscow-based baker, Tortik Annushka, who baked a lemon-yellow version of the micro purse featuring layers of multicoloured sponge (the post now has 114k likes). One thing is certain: bakers have really upped their game in quarantine.
Posted by FASHIONmode News at 10:02 AM