Zizi (Renée) Jeanmaire, a supple dancer and chanteuse who bridged the gap between classical ballet and popular revues, died in Switzerland at 96 last Friday (17 July). She was also a style star celebrated for her pixie haircut and marvellous gams – even better than Dietrich’s, according to some. Off the stage, she preferred simple, short monochrome looks, adding texture and pattern to her outfits with fur collars, printed scarves, and Goyard luggage. Also deserving mention is the fact that Jeanmaire and her husband, the dancer and choreographer Roland Petit, had enviable, often complementary couple style. Together, noted The Guardian, they “represented the height of Parisian chic, elegantly dressed, often by their friend and collaborator Yves Saint Laurent.”

Balletomanes will know that Jeanmaire frequently worked with the designer, but she remains a somewhat overlooked influence on YSL. When his muses – Betty Catroux, Catherine Deneuve, Loulou de la Falaise, Mounia, Paloma Picasso, and Victoire Doutreleau among them – are discussed, the lists never seem to get to Z. This even though Jeanmaire led the applause after the designer’s first show under his own name. Unlike the costumes Saint Laurent designed for Deneuve in Belle de Jour, which read as fashion and influenced trends, those the designer made for Jeanmaire often had a frothy showgirl style. He covered her in spangles and framed her with feathers in ways that seemed to nod to 19th-century nightlife as documented by Henri de Toulouse-Lautrec and popularised in the movie Moulin Rouge.

The New York Times obituary of Petit noted that his close collaborator Irène Lidova once allowed that the choreographer “could fall into a ‘Champagne style’”, a phrase that likewise describes the effect created by the smiling, energetic, gamine, Saint Laurent–attired Jeanmaire. 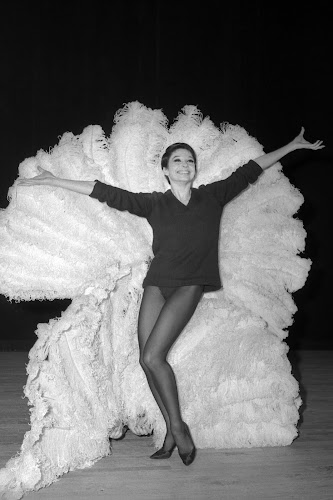 Underneath all the froth and effervescence, though, there was a deep connection between these three birds of a feather. Saint Laurent was direct about the influence of both Jeanmaire and Petit on his work. This is how the designer responded in a 1983 Vogue interview when Joan Juliet Buck asked if recurrent themes in his work, such as corsets and camisoles, were connected to the designer’s personal biography: “First of all, I think one should want to undo something that a woman is wearing. From the point of view of seduction, it can be a dress that’s laced up the front or an open back or something knotted on one shoulder so that one thinks, ‘If I pull it there, the whole dress will fall down.’ The laced corset is of course the very emblem of sexuality.
“Another thing that struck me enormously,” Saint Laurent continued, “was Carmen, the ballet that Roland Petit did with Zizi Jeanmaire in 1950. She wore two extraordinary corsets. One was black and blue, one was black and white: the left white, the right black. Zizi had very short hair – no one had it cut that short then. The production was a scandal at the time. The cigarette girls all came on smoking. I have an enormous tenderness for Roland and Zizi. They really marked my youth artistically.”
Petit and Jeanmaire brought heat and passion to the traditionally cool and formal ballet, and then made a bridge between this high form of dance and its more popular expressions. As Vogue noted in 1949, Petit’s Carmen was “exciting even for those who know nothing about the ballet, since its close sister is the music hall”. Saint Laurent would similarly veer between the bougie and bohemian, couture and prêt-à-porter. In fact, his first experiment in marrying such opposites preceded his fall from grace at Christian Dior. His 1960 show for the house included a mink-trim crocodile jacket dubbed Chicago that was a sort of elevated take on the black leather Perfecto. Despite its couturisation, the jacket symbolised rebellion, youth, and artsy Left Bank beatniks. It ruffled the fashion establishment’s feathers and communicated that Saint Laurent was a designer with his own new-gen agenda. It’s no wonder that he was so in sync with Jeanmaire, the woman who could dance a fiery Carmen and, more icily, sing, “J’suis un’ croqueus’ de diamants” (“I am a diamond eater”) with a sparkle in her eye.
Posted by FASHIONmode News at 1:12 PM