Education is the most important opportunity there is. It is also unequally distributed, which perpetuates inequality. Virgil Abloh—the sole Black American to have reached apex level as a designer in the international fashion system—has been holed up in Chicago working on changing that. Today he announced a new scholarship fund, worth an initial $1 million but with more to come, that will fund scholarships “for students of academic promise of Black, African-American, or of African descent.”

Entitled the Virgil Abloh™ “Post-Modern” Scholarship Fund, it has been endowed with financial contributions from Abloh himself, and further funding from his partners Louis Vuitton, Evian, and New Guards Group (the conglomerate of which Off-White is a member), as well as Farfetch. The Abloh Fund will be operated in partnership with the Fashion Scholarship Fund (originally named the Young Menswear Association) which has operated in the US since 1937 to create opportunities for young American fashion creatives of all backgrounds in fashion.

On a call from his home in Chicago, Abloh said: “By the metrics we’re projecting we’ll put 100 kids, Black kids, through a wide spectrum of educational institutions. I started as a 17 year old kid whose parents wanted him to be an engineer, but I wanted to be a fashion designer… I’m 39 years old and it’s taken me that time to work to get here and prove my pedigree and to be in a position to activate change.” 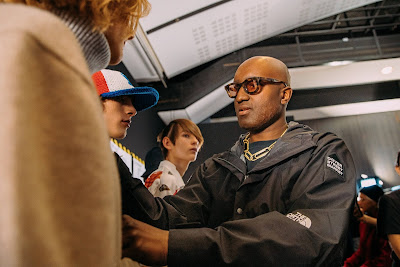 Abloh has for sure blazed a trail. Now he intends this fund to allow many more to follow, via that vital starting point of education. Eventually it should benefit many individuals, as well as provide a rich seam of trained Black creatives for the fashion and design industry (which we all know could most certainly use them).

As Abloh observed: “a benefit of this uprising is that we are paying attention to systemic problems... we can’t move on…. It’s time for us not to make this industry about fashion, but about people… And I’ve been pouring that into my own work. I’m looking at this as a call to action for me to take on more challenges that don’t only end up on the runway, but that end up changing people’s lives.”

Posted by FASHIONmode News at 5:53 PM