It’s no secret that the endless cycle of fashion shows taking place pre-Covid, often in far-flung locations around the world, was bad for the environment. According to a report by Ordre, fashion buyers and designers alone contribute 241,000 tons of CO2 emissions a year by attending fashion weeks in New York, London, Paris, and Milan — more than the total emissions of a small country such as Saint Kitts and Nevis. And that’s not even counting all the models, press and other members of staff working behind the scenes to make fashion weeks happen.

Now, though, we have entered a new age of digital-only shows as a result of the pandemic, which began with London Fashion Week in June and Couture Week this month. Milan Fashion Week Men’s and Paris Fashion Week Men’s have also gone virtual, while Stockholm Fashion Week will be returning with a digital event at the end of August. The move to digital has been championed by sustainability advocates at a time when key industry figures, led by the likes of Dries van Noten, have written open letters calling for less travel in fashion and for the industry to “review and adapt fashion shows”.

But just because shows have been taking place digitally doesn’t mean there won’t be a carbon footprint created by these fashion weeks. “There’s a very big misconception that when you go digital, it’s automatically sustainable,” Evelyn Mora, founder of Helsinki Fashion Week tells Vogue. “But that’s really not the case. It’s really important to understand that.”

Being such a new phenomenon, there is currently no data out there on the environmental impact of digital fashion weeks. That’s why Mora has enlisted the help of tech company Normative to calculate the carbon footprint of this season’s online edition of Helsinki Fashion Week, which will run from 27 July to 1 August. “Having our [digital] footprint measured and compared to physical events will give us a lot of information on how to do things differently,” Mora explains.
Calculating the footprint of a digital fashion week

Considering that the information and communications technology sector is responsible for two per cent of global greenhouse gas emissions — making it just as harmful as the aviation industry — it’s important not to forget the invisible infrastructure behind a digital fashion week. The production of video, and the massive data centres and servers required to host those videos online, all contribute to greenhouse gas emissions. As more brands embrace 3D and virtual reality (VR) technology, this digital environmental impact is only likely to rise.

“That’s the first thing that surprised me: the scale and the operations behind the digital fashion week,” comments Morten Rosén, head of partnerships and sales at Normative. “We’ve spoken to about 45 developers working on this project and gathered data from all the designers and digital partners. There are a lot of computers running, and a lot of logistics that go into running all these computers.” The number of virtual attendees is an important factor, too. “Now we’re waiting to calculate the bandwidth from the event itself; how many megabytes are being used, how many users?” Rosén explains. 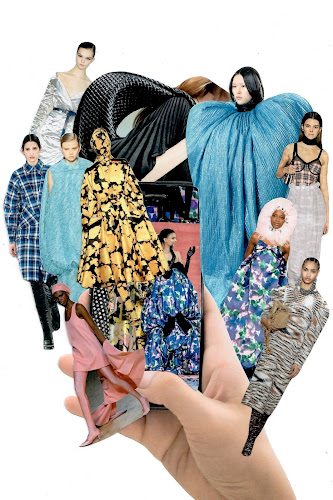 It shouldn’t be about digital versus physical

Despite these direct comparisons, it’s unlikely we’ll move to digital-only fashion weeks beyond the pandemic, with designers such as Chloé’s creative director Natacha Ramsay-Levi highlighting the value of a physical show during a Vogue Global Conversations panel in April. “Fashion shows are special events, I believe, they are here to inspire and engage conversation — and they have a meaning and they must feel authentic,” she said. “There’s a human dimension to it, which I’m very keen to keep.”

It’s a view shared by the organisers of Milan Fashion Week. “Online shows can’t replace the physical event forever; the emotions that a physical show brings could never be replaced by a digital experience,” comments Carlo Capasa, president of the Camera Nazionale della Moda Italiana. “In addition, we can’t forget the economic side of the issue. Having physical shows brings income and jobs to the city.”

Meanwhile, digital — together with the carbon footprint that brings — is already a crucial part of most fashion weeks, allowing brands to reach a wider audience. Balenciaga CEO Cédric Charbit revealed that fashion shows, for example, have a reach of 10 million viewers globally compared to the 600 guests that physically attend Paris Fashion Week. Others such as Copenhagen Fashion Week (9 to 12 August) are already planning hybrid physical-digital (or “phygital”) formats, which will likely be emulated as we gradually move out of lockdown.

Going forward then, the focus needs to be reducing the carbon footprint of both the physical and digital elements of fashion weeks — whether that means holding fewer shows, cutting back on travel, or switching to renewable energy sources. “I don’t think digital can push away physical, or vice versa; it’s a balance,” Mora concludes. “The point for us is to do it in the most sustainable way [possible].”
Posted by FASHIONmode News at 10:47 AM