When the fashion industry realised it would have to cancel the menswear and couture shows in June and July, I wrote several features predicting how a digital fashion week might unfold. This weekend, the British Fashion Council presented the first manifestation of that idea. Broadcast on LondonFashionWeek.co.uk – on the weekend that would have hosted the city’s physical men’s spring/summer 2021 shows – designers from British fashion businesses contributed live talks and short films made viewable to the public. If the event answered the question of what a digital fashion week looks like, I’m not so sure. Having been faced with studio closures and supply chain shutdowns for the past three months, few designers had actual collections to show.

In lieu of new clothes, the event turned into a kind of digital conference: constructive industry discussions, inspirational fashion films and live performances that reflected the awareness of our moment in time. Out in the real world, the Black Lives Matter movement is capturing and captivating our collective consciousness. Charles Jeffrey expressed those feelings by devoting his platform to multi-disciplinary black creatives and encouraging viewers to donate to UK Black Pride. The line-up included dancer Malik Nashad Sharpe and singer/songwriter Rachel Chinouriri, who each performed, and emerging designers Catherine Hudson and Halina Edwards, who spoke of the translation of British black identities and cultures into fashion. 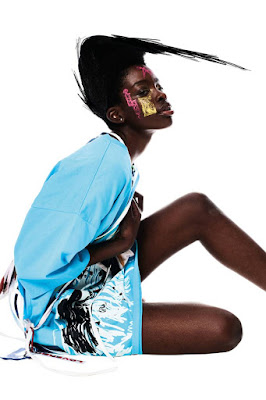 In an overture to its entire digital showcase, the BFC asked the poet James Massiah to pen and read a piece dedicated to what we’ve all been experiencing in recent months. His answer was full of hope: the life we’re all looking forward to resuming once the lockdown is lifted. “Let’s throw a party or two, throw some gladrags on, in your Clio corset, me in Bianca Saunders, looking anything but shy, in Mowalola and Asai,” he versed, namedropping four of London fashion’s bright young things. In a live interview, designer Bianca Saunders, model Jess Cole and photographer Joshua Woods talked about their new zine We Are One of the Same, centred on the idea of twins and finding similarities in different identities.

Designer duo Jordan Luca screened a short film featuring a group of people – including dancer Alexander Aplerku and poet Loshh Aje – “who can aid in leading our society into the much-anticipated revolution”. And Per Götesson sent a postcard-like animated clip from quarantine starring the model Jethro Sapon. And, while it’s true that there weren’t many new clothes to be seen at the first digital fashion week of the post-pandemic era, there were exceptions to the rule: next to Charles Jeffrey’s Loverboy brand, Marques Almeida, Daniel W Fletcher and E Tautz each presented new material.

Overall, the BFC succeeded in freeze-framing the outspoken and progressive spirit of hope that pumps through the veins of the defiant time in which we find ourselves. Early on, the lockdown inspired an appetite for change in fashion, which was easily reflected on this digital platform, not least in the webcam discussions that were part of it. Some are calling for a reimagining of fashion’s cycle and presentation formats, but while the industry will do anything to support its designers, it’s undeniable that fashion requires human interaction. For now, we soldier on from behind our laptops. Next stop: the first digital haute couture and menswear presentations from Paris on 6 July.