Since succeeding Karl Lagerfeld as artistic director of Chanel last year, Virginie Viard has gently buffed the brand with her streamlined approach to the house’s codes. Never was the changing of the guard more apparent than in her last couture show, staged on a rambling garden set inspired by the convent school at Aubazine where the young Gabrielle “Coco” Chanel spent her formative years. (WWD’s review included words like “monastic” and “girlish.”)

Which makes it all the more surprising that Viard emerged from lockdown with a couture lineup so unapologetically maximalist, it could have walked straight off an Eighties runway. Party dresses, bling and Marie-Antoinette shoes were just some of the ingredients of her presentation during the online edition of Paris Couture Week.

“It’s an eccentric girl with a touch of the Eighties. I wanted something joyful,” the designer said in a preview last week, as photographer Mikael Jansson shot models Adut Akech and Rianne Van Rompaey in an adjoining studio for the show video: a one-minute, 22-second burst of images spliced with grainy black-and-white footage.

Viard said the collection was more Lagerfeld than Coco — back in his 18th-century interior design phase. “It makes me think of images I have of him with friends before I knew him, when he would often host balls, dinner and parties. People would really dress up,” she explained. 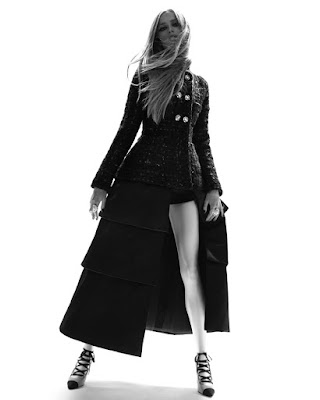 The German couturier, who was never short of a pun, might have dubbed it Rock Coco. Think deeply textured, colorful tweeds layered with gold chains, brooches and pearls; a jacket with a smocked midriff and leg-of-mutton sleeves, or a black moiré evening dress with a plunging shawl collar with rhinestone braiding peeking out.

There was a historical feel to the ample skirts, including what would have been the traditional finale dress: a bucolic bridal creation with a pannier-width skirt and blousy sleeves, and a front panel covered in dozens of tiny pleated bibs.

Heavy, flower-shaped gold brooches set with diamanté and semiprecious stones sprouted from a collarless gray and white tweed jacket flecked with gold — the fruit of a collaboration between embroiderer Lesage and jeweler Goossens. “It feels very elegant, very posh,” Akech said. “Expensive,” she whispered as an afterthought.

The looks were accessorized with trays of high jewelry, closely watched by a security guard. “We spent three days trying on all the jewels,” Viard said gleefully. “We shot some of the looks with little tiaras. I love the little princess look.” 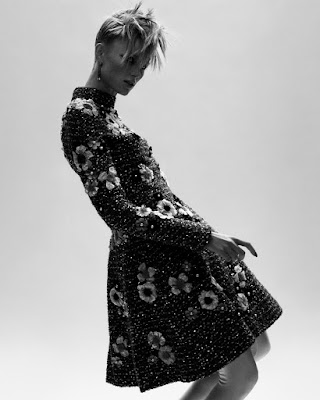 But her muse was less Princess Diana, more Princess Gloria von Thurn und Taxis, the rebel socialite who fascinated the tabloids in the Eighties with her wild partying. You could imagine her slipping on the short, off-the-shoulder dress in pink tufted tweed for a night out at the legendary Paris nightclub Le Palace.

It was hard to believe that most of these fabrics were simply lying around the Chanel studio, yet this was — despite appearances — a reined-back effort. With the couture ateliers shut for almost three months, the house produced 30 looks instead of the usual 70.

Chanel announced on Tuesday it had acquired the yarn maker Vimar 1991, which makes many of the threads used in its tweeds, to guarantee the continuity of its supply chain. This brings the total of specialty ateliers and manufacturers in the company’s Paraffection division to 36.

With travel restrictions gradually loosening, the house expects to welcome some couture clients for one-on-one appointments in Paris this week, said Bruno Pavlovsky, president of fashion and president of Chanel SAS.

Chanel usually takes its collections on tour after each runway show. Members of its team were rushed back from a client event in Palm Beach, Fla., before the air travel ban took effect in March, and further planned stops in Hong Kong, Shanghai and Seoul were canceled, forcing Chanel to take an unusual step, Pavlovsky said. 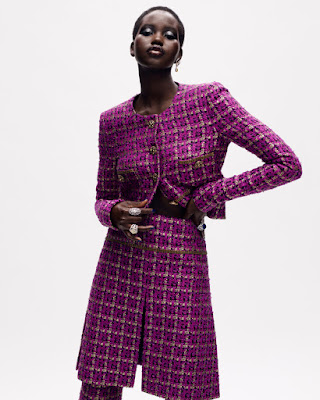 “We didn’t sell the collection. We are going to continue to present and sell the January collection during the second half of the year to clients who wish to see it,” he said. “The two collections are so different that in any case, they don’t mix. Virginie has really taken two distinct, strong positions.”

Viard said part of the reason for the U-turn was that the quiet aesthetic of her January show would not have translated to a digital-only presentation. Still, it was a colossal leap, and underlined the instinctive approach of the media-shy designer, who has so far resisted attempts to categorize her.

“I like working like this, going in the opposite direction of what I did last time. I wanted complexity, sophistication,” Viard said in her show notes.   As the longtime liaison between Lagerfeld and Chanel’s specialty ateliers, she knows the embroiderers, the feather house, shoemakers and other artisans like the back of her hand. “Frankly, I always see them with a fresh eye,” she told WWD. “It’s part of a whole universe that I play with.”

Posted by FASHIONmode News at 12:59 PM