On the evening of Sunday 5 July, Balmain will take to the river Seine to bring Paris a socially-distanced haute couture show of epic proportions to mark the 75th anniversary of the house. “From the beginning of the lockdown in Paris, I wanted to do something when it was over,” creative director Olivier Rousteing said in a phone call on Sunday morning, “to celebrate fashion and the fact that we feel kind of free in Paris now after two and half months in lockdown.”

At 7.30pm CET, the artistic director will sail by the Eiffel Tower on a péniche – a river barge – carrying 21 models wearing looks from Balmain’s haute couture archives. At 8.00pm, the show will sail under the Pont des Arts, where 50 dancers (choreographed by Jean-Charles Jousni) will be joined by the 25-year-old French signer Yseult, who will give a performance. The barge will continue towards Notre-Dame cathedral, inviting all of Paris to watch the show – from a distance. Safety is a priority. “Backstage, all the rails are distanced. We made sure there’s a two-metre distance between all the models on the boat. There’s going to be a big mirrored floor to reflect the sky,” Rousteing said. “I hope it’s not going to rain.”

During the lockdown, the designer began to draw parallels between Balmain’s history and the experiences surrounding the pandemic. Pierre Balmain founded his fashion house in 1945 amid the destruction of World War II. His “Jolie Madame” silhouette became a symbol of hope and restoration alongside Christian Dior’s “New Look”, and would go down in fashion history as a moment of optimism, epitomising the fighting spirit of the haute couture industry. “We’re not going through a war,” Rousteing acknowledged, “but we are going through a pandemic. Fashion is in a tough moment. I don’t think the answer to it is to not do anything, it’s actually to try to respect the world we now live in and give some hope.” 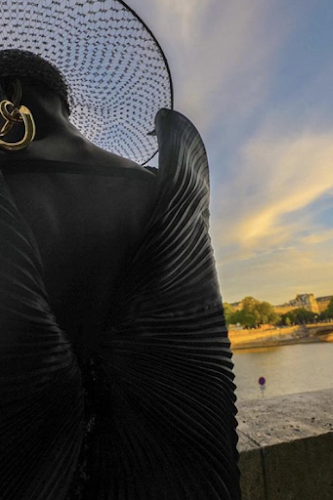 From his Balmain barge, he wants to convey a gesture of inclusivity, both by making his impromptu Balmain retrospective public but also by proxy of the values Rousteing stands for at Balmain. “I want to show people that this was a classic French house and today I am the artistic director of it. Being half-Ethiopian and half-Somalian, I show the difference between now and before. You can see the evolution, not just through the clothes but how the world has changed. I think that’s a message of hope: what we have done together. The world is changing and it’s important to remember the past as well as the present.” Rousteing will mix his own Balmain archive – dresses worn by Beyoncé, Kim Kardashian-West and Cindy Crawford, although not technically haute couture – with looks by Pierre Balmain, and former creative directors Oscar de la Renta and Erik Mortensen, whose work covers Balmain’s history between 1946 and 1990.

“It goes from the most romantic [Pierre Balmain] to the most glamorous [Mortensen] to the most Hollywood [de la Renta], showing the brand’s international vision from the beginning,” the designer said. What would the house’s founder have thought of his vision for the house today? Rousteing laughed. “Haters would say, ‘Oh my God!’ But what I would say is: I’ve built the Balmain Army,” he noted, referring to the diversity initiative he set up for the brand. “Monsieur Balmain dressed women, who, at the time, were not conservative: Brigitte Bardot, Josephine Baker. I think the Balmain Army I’ve built will be remembered in 20 years. And I think he was really pop, in his own way. He dressed singers and princesses. I dressed Michelle Obama but at the same time I can dress pop culture. We have the same ambiguity between bourgeoisie and pop.”
Posted by FASHIONmode News at 12:29 PM