Kansai Yamamoto, the exuberant Japanese designer, died on July 21, 2020, of acute myeloid leukemia. He was 76. Yamamoto was born in Yokohama, in 1944, a year before his city was firebombed in the war. He studied civil engineering then dedicated himself to fashion, a commitment that was deeply personal. “Design is self-realization,” Yamamoto told Kuniko Miyanaga, author of the 1993 book The Creative Crackly Edge: Emerging Individualism in Japan.

The August 15, 1970, issue of Vogue includes a street style snap of the designer, in the States from Tokyo, giving “folks a nice turn, wearing his creamy snakeskin suit”—accessorized with teased hair, cowboy boots, and a bag half as big as his torso. “I felt every day I was the model in a fashion show and everyone around me were members of the audience,” Yamamoto said in a 2018 talk at the Brooklyn Museum of Art. “There were many times people looked at me weird.”

Self-expression through dress was the designer’s rebel yell; he was a proponent of fluid dressing, and on a deeper level, he rejected rigid societal norms. (No wonder civil engineering held no interest for him.) “I disliked and resisted square clothes whose quality was in their expensive material and good sewing,” Yamamoto told Miyanaga, revealing a hippie-ish countercultural streak. It makes sense, then, that in 1971 Yamamoto would choose to make his international debut in London, the city that had been the beating heart of the Youthquake, in a country where it was still possible to épater le bourgeois. 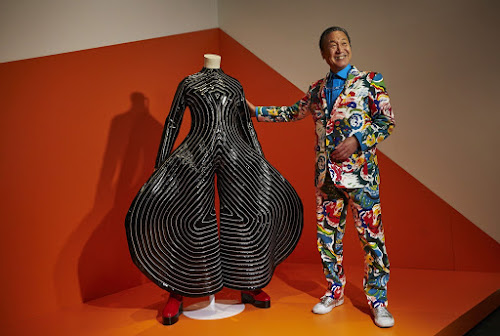 Today Yamamoto’s name is indelibly linked to that of David Bowie, who, as the gender-bending Ziggy Stardust, was wearing Yamamoto’s work before he met the designer. The two started collaborating in 1973. Among the better-known pieces Yamamoto made for the pop star are a glam-meets-Deco space samurai one-piece with circle legs, and a one-armed, one-legged multicolor Lurex-shot knit jumpsuit. The two men, said Yamamoto at the Brooklyn Museum talk, were united in their dedication to “radical appearance.”

One of the ways the designer pushed boundaries on the runways in the 1970s and 1980s was through exaggerated proportions. He made use of quilting to give dimensionality to his garments and delighted in color, once saying it was “like oxygen.” Some of his strongest work has a Pop-slash-glam rock look. Yamamoto liked to give a populist twist to imagery taken from Japanese art, particularly Kabuki theater—and those were the looks Nicolas Ghesquière revisited with their creator for Louis Vuitton’s 2018 resort collection.

Yamamoto’s involvement with projects like Kansai Super Show Hello! promoted positive cultural exchange, but there were also times when his work was insensitively appropriative, gimmicky, and seemed to trade on tired, stereotypical ideas of “otherness.” He did, however, pave the way onto the international scene for Japanese designers like Rei Kawakubo and Yohji Yamamoto by showing in Paris as early as 1975, a few years after Issey Miyake. Even in photographs it’s apparent that Kansai Yamamoto was a man who pulsated with energy. He lent some of that to clothes that were bright, gaudy, tactile—and, for the most part, irrepressibly optimistic.
Posted by FASHIONmode News at 1:49 PM