For anyone fortunate enough (or unfortunate enough, depending on your threshold for on-screen obscenity) to have seen John Waters’s string of wilfully shocking early movies, the image of Divine in all his glory is impossible to forget. It isn’t just his signature look of oversized, Jayne Mansfield-on-acid platinum blonde wigs, and eyebrows halfway up his forehead, either. Whether being sexually assaulted by a giant lobster in 1970’s Multiple Maniacs, or, in one especially infamous scene from 1972’s Pink Flamingos, eating dog feces, he is spellbinding. If Waters is known as the “Pope of Trash,” then Divine was undoubtedly his queen, or in the words of Waters himself, “the most beautiful woman in the world, almost.”

The subversive cult figure might seem like an unlikely partner for Loewe’s brand of traditional Iberian craft, though under Jonathan Anderson the brand has moved towards more offbeat, art world-adjacent collaborations. While the planned capsule collection and accompanying exhibition have been postponed due to the current pandemic, the project will live on via a limited edition release of T-shirts and totes and an online exhibition featuring both Divine memorabilia and samples of the collection which never was. (The original collection mixes screen prints on polyester of B-movie posters and plenty of marabou feathers, coming together to form a heady, typically Divine mix of high and low.) Fifteen percent of proceeds are being donated to Visual AIDS, an organisation supporting artists living with HIV, while a donation has also been made to Baltimore Pride, a black-led LGBT+ organisation based in Divine’s hometown.
Divine Cushion Tote bag in canvas and calfskin.

With objects like Divine’s personal make-up case on display, the exhibition is also an ode to Harris Glenn Milstead, the man behind the flamboyance and filth of the film persona – better known among friends for his modesty and generosity than his shocking on-screen antics. “He was an extraordinary person, very soft-spoken and gentle, and quite contrary to the alter ego that you would see on a big screen,” Greg Gorman, the photographer whose many portraits of Divine are featured in the collection, tells Vogue. “He did also love the glamorous life, though, so I think he’d be quite proud of this.” 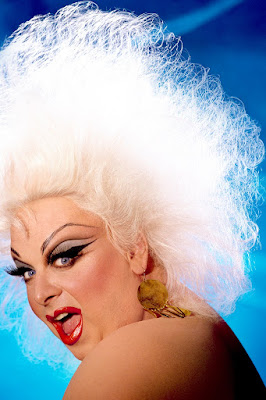 While Gorman is close friends with John Waters to this day and was already a fan of Divine’s boundary-pushing performances in the low-budget ’70s films they made together in Baltimore, his first meeting with Divine took place courtesy of another Hollywood gay icon, Tab Hunter. “Tab was raising funds to produce and star in a Paul Bartel movie called Lust In The Dust with Divine, and he called me up and asked if I wanted to shoot some pictures of him,” Gorman remembers. “I said sure, I’ve always loved his movies, it would be cool to meet him. Sure enough, I went up there and shot him, and we hit it off like gangbusters, and that’s what started a lifetime friendship.”

While Gorman has fond memories of Divine hanging out at his home in Los Angeles over the years, feet dangling in the pool as he ate his lunch, he’s also keen to see Divine’s career remembered for what it truly was. “The misnomer from a lot of people, and John will be the first person to say this, is that he was not a drag queen by any stretch of the imagination, he really was an actor,” Gorman continues. “In all the years that we were friends and hung out together, I never once was with him in public anywhere in drag. Divine was a character that he created with John which he then parlayed into other characters, even if they were always larger than life.”

What does he believe makes Divine’s legacy so relevant today? “Divine was irreverent, and he lived life to the fullest, which I think is something important for everybody. It’s about being who you are and standing up for what you believe in.” It’s an apt message for Pride month, and one that Jonathan Anderson also echoes in his explanation for why Divine felt like the right person for Loewe to celebrate, however unexpected it may initially seem. “I think it is a timely initiative, in that it is a celebration of creative freedom and challenging the world order,” adds Anderson. “That’s what Divine was all about: creating his own incredible world, no matter what. Now more than ever, that’s what we all should do.”