Hood by Air Returns With A T-Shirt, Cash Card & Expansive Plans For The Future

It’s apt that the brand would announce its comeback during a “digital” fashion week that has exposed much of fashion’s inability to commune with the larger world. The brand returns with a four-pronged approach that fuses the digital, physical, ideological, societal, and creative. A release sent out earlier this week reads, “Ahead of its time, a lucky 13 years ago, Hood By Air was born out of self-reliance, providing a breath of fresh air in an otherwise stagnant room. Few understood the now vanguard’s intent in its original conceit; 2020 has provided a welcomed and timely opportunity to catch up.”

The first idea the revived brand is debuting – aside from its new website and social media accounts – is a T-shirt and limited-edition Cash Card made in collaboration with the Cash App. Both are available on HBA’s website and live under the Uprising umbrella, with all proceeds of the items benefitting Black Trans Femmes in the Arts, the Emergency Release Fund, and Gays and Lesbians Living In A Transgender Society. The tee, which will likely sell out, affirms what fans have long known about founder Shayne Oliver’s message to fashion: Graphics read “Black Owned,” “New World Citizen,” “Elite Urban Brigade,” and “Hood by Air. Racially Charged Since 2007.” (There’s also a cheeky wink to the consumerist bent of a collaboration with a money service: “HBAGAY4PAY.”) 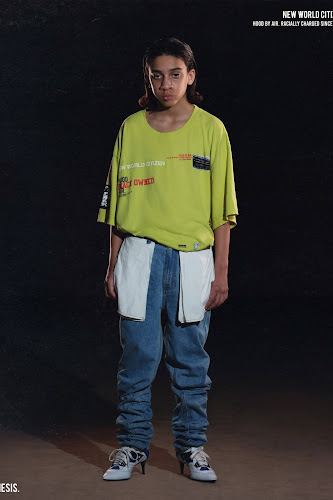 The campaign images for the tees and Cash Card are shot by Torso, with art direction by Anonymous Club, another new branch of HBA that supports young artists through participation in the HBA universe. In total, the new Hood by Air will encompass the Anonymous Club alongside Hood by Air (a yearly event that will debut new luxury products), HBA (ready-to-wear released direct-to-consumer at its own pace, of which this tee and collaboration are a part), and Museum (a re-release of archive Hood by Air items reinterpreted by new designers-in-residence). In this, Hood by Air is doing what many so-called luxury fashion brands often fail to do: Communicating complex ideas of fashion, aspiration, ownership, and status directly to shoppers and fans while building a community around the people in its world.

“There is another world that still needs to be created,” Oliver wrote in a statement. “It’s about tearing the old one down while figuring out a way to build a new one up, and in the midst of all of that, amplifying the ideas and conversations that we feel are important. Thirteen years ago Hood By Air was birthed out of young, Black and POC creatives performing at the highest level. This was the contemporary output because no one else was doing it. Hood By Air resides here to allow risk and be vanguards for where it’s going next. Hood By Air, the new institution.”

The musician Mykki Blanco put it best, when speaking to Dazed last year: “Shayne is up there with the genius of Galliano or McQueen, and my girl is not done yet. Hood By Air raised an entire generation. They queered an entire generation.” And they’re just getting started – again.
Posted by FASHIONmode News at 10:10 AM