Having your name uttered in the same sentence as Rihanna’s just might be the highest honour around. But what about appearing in the musician turned mogul’s campaign for her intimates collection, Savage X Fenty, alongside the superstar herself? Mind-blowing, for sure, and it’s the reality for four Savage X Fenty fans.

Earlier in the spring, Rihanna announced a casting search for the new faces of her summer campaign. Thousands applied, posting their best Savage X snaps on Instagram. After months, four were chosen to represent the brand’s summer drop: Brenda Senyana, Kortney Russell, Gerlind Anagho, and Sariena Luy. “I got a DM from the Savage IG page notifying me that I had been selected, and literally my world stopped,” Senyana tells Vogue. “I have entered contests before, but you almost never think it is going to be you – you just hope. Well, today it’s me, and I am taking it all in!” 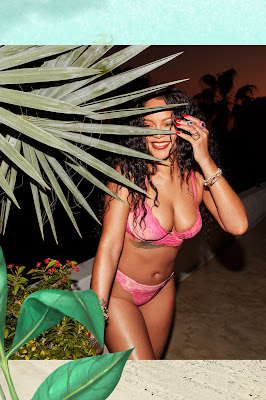 “When I heard I was actually one of the winners, I could barely drive. I was shaking and in tears – tears of joy,” Anagho says. “I pulled over to a parking lot and hollered some more. One would have thought I won the lottery… which I did by modelling for the #SavageXSummer campaign. I’ve seen people have these types of reactions and thought it is exaggerated, but I can now say they are organic.”

The four campaign stars are debuting their Savage X images here – and telling Vogue why it’s so important for them to be seen and heard in the world of fashion. “It’s important to change the narrative of one specific body type being the standard of beauty,” says Russell. “Doing that can be a hard thing to do and can get you a lot of negative opinions along the way, but it’s something I think Savage X is doing successfully! I’m excited to see the fashion industry change, and I’m so privileged to be contributing to that change!”

Posted by FASHIONmode News at 11:14 AM