Princess Beatrice married Edoardo Mapelli Mozzi in an intimate ceremony at the Royal Chapel of All Saints in Windsor on 17 July. The guests included Her Majesty the Queen and the Duke of Edinburgh, as well as the Duke and Duchess of York. According to a statement released by Buckingham Palace on 18 July, “The couple decided to hold a small private ceremony with their parents and siblings following the postponement of their wedding in May. Working within government guidelines, the service was in keeping with the unique circumstances while enabling them to celebrate their wedding with their closest family.” Read on for everything you need to know about the unusual royal wedding.

How did Princess Beatrice’s wedding plans change in light of the coronavirus epidemic?

Princess Beatrice and Edoardo Mapelli Mozzi were originally due to marry on 29 May at Chapel Royal, situated within St James’s Palace in London, followed by a reception hosted by the Queen in the gardens of Buckingham Palace. In light of the pandemic, however, the royal couple selected the Royal Chapel of All Saints in Windsor as an alternative venue. First built by George IV in the early 19th century, the neo-Gothic chapel is set within the grounds of the Royal Lodge, the Grade II-listed home of the Yorks, in Windsor Great Park. The Queen regularly worships at Chapel Royal due to its privacy, only attending services at the much larger St George’s Chapel at Windsor Castle, where the Duke and Duchess of Sussex were married, on notable religious occasions.

In a refreshingly modern (and wonderfully sustainable) move, Princess Beatrice chose to wear a vintage Norman Hartnell dress borrowed from the Queen for her wedding. Her Majesty famously wore the dress to attend the Lawrence of Arabia premiere at the Odeon Leicester Square in 1962. The Queen’s dresser, Angela Kelly, helped to fit the dress to the bride’s exact measurements and added organza puff sleeves. Made from ivory Peau De Soie taffeta, the diamanté-encrusted gown is trimmed with Duchess satin.

Hartnell famously designed Her Majesty’s wedding gown for her nuptials in 1947. Inspired by Botticelli’s Primavera and intended to be symbolic of the nation’s post-war rebirth, Hartnell embroidered garlands of jasmine, lilacs and roses on Princess Elizabeth’s train in silver thread. The finished dress was also adorned with more than 10,000 seed pearls.

What jewellery did Princess Beatrice wear on her wedding day?

In another nod to her grandmother, Princess Beatrice wore the Queen Mary tiara – the same diamond fringe piece that the Queen wore to marry the Duke of Edinburgh. Originally given to Queen Mary as a wedding present by Queen Victoria, the kokoshnik design eventually passed to the Queen Mother, who lent it to her daughter as her “something borrowed” on her wedding day. Its 47 graduated bars can also be worn as a necklace.

Which flowers did Princess Beatrice carry in her wedding bouquet? 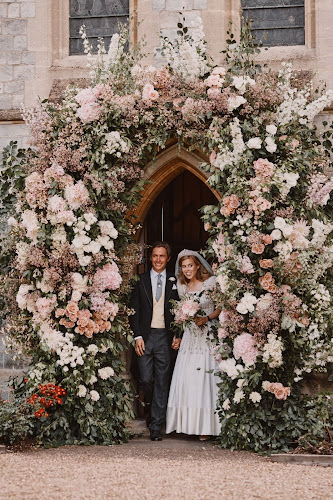 Due to Covid-19 restrictions, only a small number of guests attended Princess Beatrice’s wedding ceremony, including the Queen, the Duke of Edinburgh, and the Yorks. The Reverend Canon Paul Wright, sub-dean of the Chapel Royal, led the wedding ceremony along with the Reverend Canon Martin Poll, domestic chaplain to Her Majesty The Queen. In accordance with government regulations, no hymns were performed. However, the service included readings of the First Epistle to the Corinthians as well as two of the couple’s favourite poems: Sonnet 116 by William Shakespeare and “I carry you in my heart” by E E Cummings.

When did Princess Beatrice get engaged?

The couple’s engagement was formally announced in September 2019, with photographs taken by Beatrice’s younger sister, Princess Eugenie. Edoardo had proposed on a holiday in Italy. “I’m so happy for you my dearest big sissy and dear Edo,” Eugenie wrote on Instagram at the time. “It’s been a long time coming and you two are meant to be.”

The bride-to-be, who chose Zimmermann’s floral Allia dress for her engagement photos, said at the time: “We are extremely happy to be able to share the news of our recent engagement. We are both so excited to be embarking on this life adventure together and can’t wait to actually be married. We share so many similar interests and values and we know that this will stand us in great stead for the years ahead, full of love and happiness.”
What does Princess Beatrice’s engagement ring look like?

Beatrice’s platinum and diamond engagement ring was handcrafted by British jewellery designer, Shaun Leane, who has worked with Alexander McQueen and Givenchy. “It’s a fusion of Art Deco, which Eduardo loves, with Victorian elements for Beatrice,” Leane told Vogue’s contributing jewellery director Carol Woolton of the two and a half-carat brilliant cut stone ring with shoulder baguettes set in platinum. “It’s a mixture of both eras and crafted to include personal messages, so it’s entirely unique to them.”

How does it compare to other royal engagement rings?

Princess Beatrice’s choice is distinct from her family’s preference for coloured stones – her mother’s engagement ring was ruby, and Eugenie wears a pinky-orange padparadscha sapphire. “Eduardo wanted diamonds and we ethically sourced these stones together, and the whole experience was an honour working on the design with him, as he was determined they would be united in the crafting of the ring,” says Leane. “That’s what makes a bespoke ring memorable and important.”

“It’s terrific news that the royal family is commissioning a modern piece while acting as a mentor in the design process,” Woolton said at the time of the royal engagement. “Prince Phillip took part in the designing of the Queen’s diamond engagement ring, Princess Margaret was a jewellery patron, and Prince Albert was a dab hand at designing all types of jewels for Queen Victoria, including necklaces, and the sapphire and diamond coronet on display in the Bollinger Gallery at the Victoria & Albert Museum. This is important for British design and our ancient culture of gold smithing. Long may the love story continue.”
Posted by FASHIONmode News at 10:15 AM