Will TikTok Replace The Catwalk As The Harbinger Of The New Season?

The fashion industry might have been slow to embrace Chinese-owned social-media behemoth TikTok, but the platform’s DIY approach to creativity is proving to be a key component as the rethought show season gets underway. Running until 8 October, #TikTokFashionMonth will welcome brands including Saint Laurent, JW Anderson, Dior and Louis Vuitton to livestream their new collections straight from the platform in the hopes of catching the eye of the 800 million active users.

At first glance, a platform that prizes a homespun approach to short-film content might be at complete odds with the refined, polished appearance luxury brands have spent decades cultivating. Yet the link-up indicates brands’ desires to gain a new understanding of the contemporary consumer, especially considering TikTok’s popularity with Gen-Z. “TikTok is not about the glossy, perfect-life image, but rather it’s about expressing yourself and showcasing your passions,” Cece Vu, fashion and beauty partnerships lead at TikTok told British Vogue via email. “TikTok offers an authentic and community-driven approach, which gives the fashion industry a platform to showcase their creativity in a new way.”

This unfiltered approach has admittedly been daunting for luxury brands to embrace. “There is this fear of democratising their brand and feeling that they’ll lose that exclusivity,” Kristina Karassoulis, who leads on luxury brand partnerships for Europe, told British Vogue via video call. “With luxury there was this real unattainable strive for perfection, but we’re now saying that there’s this flawed side that our audience loves. It’s not about changing the brand’s message or core brand values, but it is about changing the way that you speak to the audience.”

So far, some of fashion’s most storied houses are thriving on TikTok. Riccardo Tisci’s Burberry launched the #TBChallenge — where users are tasked with creating the Thomas Burberry monogram with clever hand positioning — in 2019, and it now boasts over 110 million views. Karassoulis explains that Gucci’s #AccidentalInfluencer campaign proved popular, and “set the agenda for what this new version of luxury is.” Elsewhere, she credits Balenciaga as being particularly creative on the platform, “not only from a commercial point of view, but also organically. You can see them build into the trends our audience love, like ASMR [Autonomous Sensory Meridian Response],” she added. Selfridges and its balance of self-edited, low-brow meets high-brow content is also held in high esteem amongst Team TikTok.

Much of the engagement for these big-name fashion brands has thus far traded on community interaction that walks a fine line of imitation. One user-driven trend, the #GucciChallenge, encouraged users to assemble the brand’s look from their pre-existing wardrobes, while another saw TikTokers knit their own version of a JW Anderson cardigan worn by Harry Styles on American television. Both Gucci and JW Anderson embraced the trends, co-opting the original content created to share and celebrate it both on and off platform.

Cassandra Russell, who leads on fashion partnerships at TikTok, explains that this is the only way brands can harness power. “You can’t be a brand on TikTok if you’re not open to the idea of people copying and building on your content,” she shared, speaking to Vogue via Zoom. “That’s the nature of it, and imitation is the highest form of flattery on the platform. If you produce something that captures everyone’s imagination, and they think ‘I’m going to give my own twist,’ that is why you should be working with TikTok.” 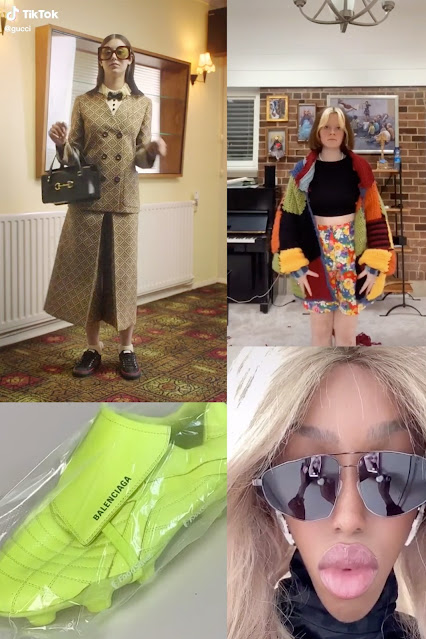 Nevertheless TikTok, which started life largely as a platform by which to share dance routines, has stiff competition. Instagram and its polished aesthetic has quickly become a natural space for fashion brands to thrive on over the last decade – and the launch of its recent Reels function was a clear challenge to TikTok. As Vu explains, however, TikTok has its own agenda. “Competition is great for innovation and we welcome it,” she wrote. “I believe the TikTok experience leans more towards community, which allows for brands and consumers to engage in a completely new way.”

“Community” is a word that TikTok representatives return to time and time again. The platform relies on the user and their innovation more than most, with a young woman from Connecticut — as is the case with D’Amelio — being just as likely to go viral as an activation planned by social-media professionals for months.

“We’ve moved into this era now where people want something that is real,” Karassoulis, the former head of UK luxury advertising at The Financial Times continues. “You don’t go on there to follow your friends, you go on there to see amazing content that is found for you. We can talk about trends, we can talk about culture, but I think it’s that authenticity and transparency which luxury brands need in order to democratise their brands.”

As the fashion industry goes through an overwhelming shift owing to the impact of the coronavirus pandemic, TikTok is uniquely poised to bridge the gap between consumer and luxury product. Over the course of the pandemic, Vu admits that it saw an “incredible” period of growth, but also a shift in demand for more educational content. Brands have responded to this wisely by offering insight into the ateliers and archives so that users are “learning more about brands’ values and craftsmanship, such as the history of Dior’s bar jacket or how the Coach logo is stamped on each bag in an ASMR/oddly satisfying way,” she explained. “Seeing just how much our users value these connections with the community is the very reason why we continue to build and invest in these experiences.”

TikTok also insists it doesn’t have plans to usurp the fashion show. Instead, it sees its future co-existing with their assumed wide-spread return. “When you throw in the power of our creators [at live events], that’s when you can drive mass engagement,” Russell says of the single-invite, huge-audience power these young creators can generate. Vu imagines that brands returning to the traditional show format in the near future would be wise to follow the user-focused approach this season has encouraged, with a focus on intimate moments and ensuring that users feel included in the conversation.
Posted by FASHIONmode News at 5:02 PM