Adidas Unveils Its Most Eco Trainer To Date

“When it comes to UltraBoost DNA Loop, we didn’t take the easy route!” Adidas’s VP of brand strategy James Carnes tells British Vogue. He’s talking about the sports giant’s brand new eco “made to be remade” trainer. Its credentials are impressive: the shoe is crafted from 100 per cent recyclable single TPU material and zero glue, meaning that it can ultimately be returned and reimagined as a new running trainer.

Innovative and futuristic, the DNA Loop joins a family of UltraBoost footwear that prides itself on advanced technologies and pioneering manufacture techniques. “We over-invest in bringing these principles into our sports products – particularly as we know this is a generation of consumers who have significant power to create change,” Carnes says.

In April last year, 200 “creators” around the world were asked to road test Gen 1 of the UltraBoost. Following the trial, each piece was broken down and remade to produce Gen 2, which went through the same rigorous assessment process in November 2019. Now, the result of all that road-testing has been made available to 1,500 fans, who will join the sustainably-focused micro-community and help shape the future of its design journey through a 21-week cycle that will encourage still more feedback. 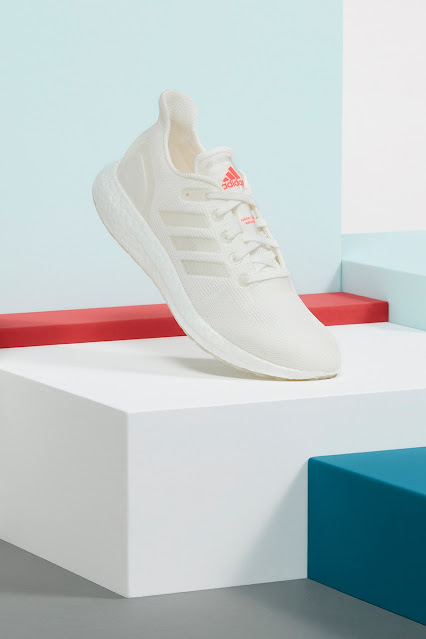 The UltraBoost DNA Loop launch will kick off Adidas’s immersive Creators Club Week experience, a seven-day festival that will see the largest-ever drop of exclusive shoes (70 new designs will feature). The digital event will invite consumers to interact with their favourite footwear, and limited-edition versions of the most sought-after styles – including the Ninja, Ultra4D, Superstar Tattoo and NMD – will be available to buy throughout the week, along with a new addition to its Parley range, the 4D model made from ocean plastics.

A host of famous faces will take to the virtual stage at the event, including supermodel Karlie Kloss and rapper and record executive Pusha T. Kloss and Carnes will introduce the cutting-edge technology used to make the new trainer. “Through this shoe, Adidas is leading an incredibly important conversation around circularity and fabric innovation. We hope this launch inspires creators to join us as we strive to create a more sustainable future together,” Kloss said of the release. Pusha T will talk about the impact of ’90s street culture on the music and fashion industries, in addition to the coveted Ozweego style he collaborated on in the past.

Members who sign up for free to Adidas’s Creators Club loyalty programme will have the chance to win prizes including a piece of art by fashion designer Paolina Russo, who specialises in up-cycling, and a pair of Adidas Predator football boots signed by World Cup winner Paul Pogba.
Posted by FASHIONmode News at 9:21 AM