When Tom Van Dorpe was appointed artistic director of The Kooples in the second week of February, nobody could have imagined the year that would unfold. “A surprising turn,” he laughs over Zoom. “But at least it helped us stay very focused… we didn’t have a lot of things going on.” Certainly, within the protocols and remote working methods of the pandemic, his wasn’t the conventional way to start a new job at a fashion house – but what he did manage to fit in, moments before the pandemic hit, was two research trips with his team (one to London and one to Los Angeles), to explore the refreshed, international direction he planned to pivot the Parisian megabrand towards. “I think it was really important to go to different places, to get a bit outside of this ‘Parisian’ aesthetic,” he explains. “Of course it's always going to be a Parisian brand, about the Parisian elegance mixed with that rock and roll DNA. But for me, it was important to take it somewhere else as a start.”

It’s that intention which feels present throughout his debut – and it makes sense. Over the past 13 years, The Kooples has established itself as synonymous with a particular sort of androgynous dress code: leather jackets and skinny jeans, a sort of 2010s Hedi Slimane vision made for for the contemporary market. “It’s a cool look,” laughs Van Dorpe. “And I’m from the generation who loves that aesthetic, because I was 20-something when everything was all about The Strokes and The Hives.” It’s something which, in its heyday, propelled the brand to major success – but no longer feels reflective of the zeitgeist. So instead, what Van Dorpe has proposed for The Kooples’s future is a far broader vision – one whose inspiration remains rooted in music subcultures and the idea of a couple’s wardrobe, but appears refreshed for now. 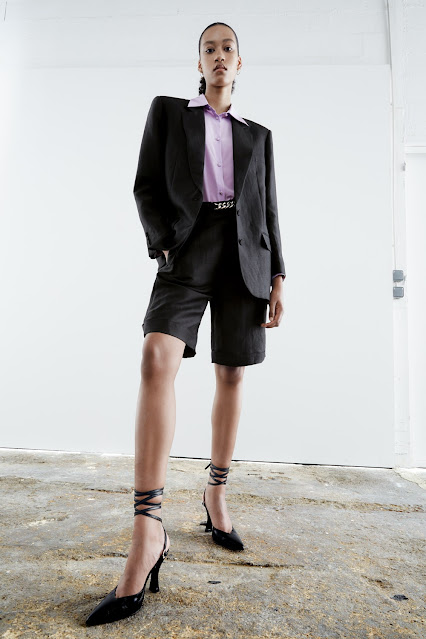 So, instead of studded leathers and monochrome, he is offering up floral prints (“flowers with attitude”), and lilac tracksuits; Nirvana-energy printed tees and relaxed tailoring. Basically, something more Johnny and Winona than Marianne and Mick (look at their new leather jacket and there’s not a ’70s stud in sight). It’s a collection imbued with that Belgian-inflected ’90s minimalism that remains fashion’s favourite, but that – inspired by the eclectic series of couples Van Dorpe cast for the brand’s most recent campaign – appears layered into something resolutely wearable. “It’s a designer point of view mixed with that contemporary way of dressing for any occasion,” he explains. “And today I feel like you cannot put people into specific categories like: you are so rock and roll that you only wear slim jeans; you’re a glamour girl so you only wear sexy dresses; you’re a powerful woman so you just wear a suit. Now, everything is far more mixed.”

In that spirit, the design process for the men’s and women’s collections has been united (the teams are now working alongside one another rather than remotely, sharing everything from soundtracks to moodboards), and its breadth broadened. In a modern age, liminal identities no longer feel relevant – neither to Van Dorpe nor, he believes, the customers he wants to serve. It’s a sentiment he hopes to evolve further into the future. “I feel like joining a contemporary brand today gives myself and the brand a platform, which is so important,” he reflects. “It’s talking to a big audience, and perhaps people who aren’t having these conversations. I feel excited to speak to them about things like sexual preferences; inclusivity; sizing; the environment. With the marketing behind us, and the projects we have in the works, I honestly think we could make a difference.” Certainly if Van Dorpe can do for those conversations what The Kooples did for skinny jeans – essentially, serve them to the masses – then it’ll be nothing but a good thing.
Posted by FASHIONmode News at 5:18 PM