In the days leading up to the Salvatore Ferragamo show, editors who couldn’t travel to Milan for its runway show received a pair of iPhone-compatible, virtual reality glasses. They came with a note from artistic director Paul Andrew: “I’m so sad you cannot be with me in Milan this season, but I’ve found a way to transport you to the front row!”

It wasn’t simply to heighten the experience long-distance, but a symbol of a particularly cinematic season for Andrew. He spent lockdown in his home in Florence – where the brand is based – “getting onto a bit of a Hitchcock binge,” he explained on a video call from Milan before the show.

Re-watching classics such as The Birds, Vertigo and Marni, the designer drew a parallel between Alfred Hitchcock’s sense for an unnerving filmic atmosphere with the suspenseful reality that was unfolding outside in the real world. “In all of his films there’s this weird, surreal, twisted darkness. Watching those films, it felt a total reflection of what we’ve been going through. ‘Where are we even going? Is the vaccine coming?’” Andrew asked, rhetorically. “But most of Hitchcock’s films end on a positive note. That’s the focus I’m trying to put on this collection. Hopefully we’ll soon be ready to be buying fashion and looking good again.” 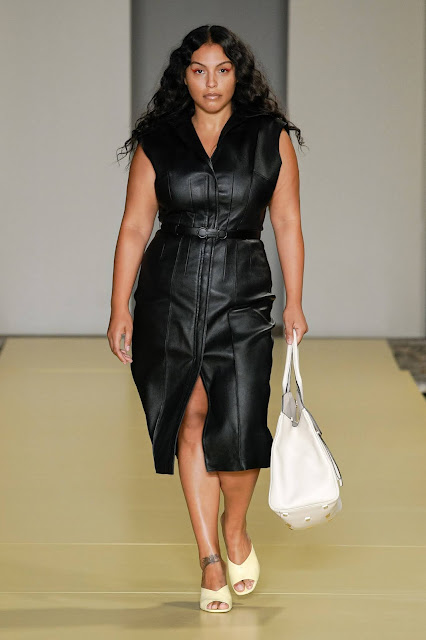 He made his case for that anticipation in a collection inspired by the distinctive femininity portrayed in Hitchcock’s films – elegance, sophistication, determination – and the outfits worn by his heroines (and their male counterparts). The show was heralded by ominous crowing bird sounds followed by a short film directed by his friend Luca Guadagnino (who also just released a documentary about the brand at the Venice Film Festival) in homage to Hitchcock. Shot in Technicolor, it heralded the palette to come in Andrew’s live-streamed runway show from Milan. Kiki Willems opened in a white leather dress, her hair dyed a frosty blonde matching the colour favoured by Hitchcock for his leading ladies. Soon, a porcelain green suit followed as a reference to the one worn by Tippi Hedren in The Birds, modernised by Andrew with a sarouel skirt.

The ensuing looks largely echoed Hitchcock’s legacy, from a plumed dress as another ode to The Birds to the Prince of Wales suit worn by Sean Connery in Marni – interpreted in an asymmetrical dress and an hourglass suit – and the white pumps worn by his heroines, which Andrew had transformed into new versions of the Ferragamo F heel in those twisted Technicolor hues. If some of us felt bad about the amount of film and TV we watched in lockdown, Andrew found a creative output for his own binge-watching. And, as he said, “Lockdown sucked for everyone, but I think we all agree on the benefits of having time. It was a horrible situation and everyone’s business is suffering, but what’s come out of it has to be taken as a positive. You can’t let it all be negative.”

At Ferragamo, Andrew and his team had been inspired to change the ways of their business, too. While the collection continued to expand on the sustainability measures the company has been taking, it also debuted a more condensed approach. “We’re really rethinking how we design and sell the collection, and the size of the collection,” Andrew explained. “Less but better. There are [just over] 30 looks. It’s much more condensed, and we’re really trying to get as many of these pieces into our stores as possible. You know the story with fashion shows: what’s sold is a tiny fragment of what you actually see on the runway. I’m hoping to make it much more tight and edited.”
Posted by FASHIONmode News at 4:29 PM