“We All Need To Hear Messages Of Hope”: Giorgio Armani On His Emporio Armani S/S´21 Collection

Recognising the severity of the situation, Giorgio Armani was the first designer to cancel attendance for a fashion show when the pandemic hit Europe in February. “I am a man of decision and action, in that I believe in making decisions and acting upon them. I have never been one to take my time talking about things when it is clear that steps need to be taken,” the designer writes in an email, on the morning of his first collection presentation post-lockdown. “So, when I saw what was happening I couldn’t sit back; I had to do something. And fast.” Seven months on, the 86-year-old designer isn’t itching to return to the runway. Rather than joining the brands that have slowly returned to the real-life show format this Milan Fashion Week, he released a short film to showcase his spring/summer 2021 Emporio Armani collection.

Titled Building Dialogues, the clip – directed by Leandro Manuel Emede and Nicolò Cerioni, with an original score by Frédéric Sanchez – was shot around Armani’s monumental Milanese headquarters in via Bergognone, and presents the collection on a diverse cast of models and performance artists. People, he says, who have always been a part of the youth-driven Emporio Armani community. “I wanted to not only show my work in a new way, but to also make a symbolic gesture in support of those arts – music, dance and acting – that have been particularly affected by the prolonged lockdown period and are still struggling today.” Between the collection itself and the message it conveys, the message is movement: clothes you can move in, worn by a young generation on the move. 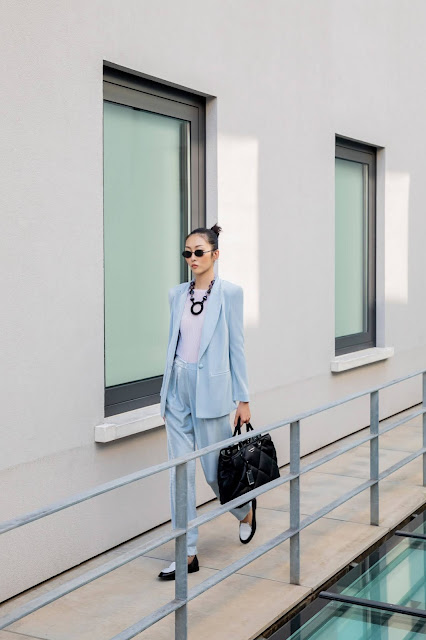 “What young people need to hear – what we all need to hear – are messages of hope,” Armani says. “We need to tell them that the world is always changing and that this situation will pass. I believe that in Italy we have come together in an impressive way to fight the pandemic. Even the fashion industry, so often fragmented in its approach because of ego, has responded as one, which is heartening. So, let’s look for the good in humanity that Covid-19 has shone a spotlight on – the compassion, the sense of community and togetherness, the courage and dedication of front-line health workers. And let’s build on that for the future.” As far as fashion goes – an industry in which he remains the longest-working living designer, and something of a wise man – Armani says lockdown has reinforced what he already knew.

“For example, while I do believe there is a role for showing collections on models to bring designs to life, do so many people still need to fly around the world to see them? The decision I made in February to hold my women’s show behind closed doors and livestream it was, of course, provoked by the Covid-19 situation, but it was an interesting exercise and did demonstrate that there is more than one way to do things effectively,” he points out. “Therefore, one change I definitely believe will happen is that brands will think carefully about how many shows they stage.” When the designer unveils his Giorgio Armani collection on Saturday 24 September, it will also be a cinematic experience. Only, this time he’s broadcasting it on Italian primetime TV.
Posted by FASHIONmode News at 4:08 PM