If you happened across Andreas Kronthaler’s Instagram account over the course of 2020, you’ll have discovered a stream of Vivienne Westwood portraits: an assortment of the most remarkably cheering images depicting Westwood at home, dressed up to the nines and looking absolutely phenomenal ahead of weekly speeches she would deliver on Instagram about changing the world. “She asked me to do it, and every week it gave me something to do. I do like dressing her up – she was a bit like a doll,” smiles Kronthaler. “It has been very challenging, but it was a good summer because I still have my Vivienne.”

“Time just slowed down,” he continues. “It was okay to be at home and in this bubble, because the whole world was.” During the months spent at home in Clapham, south London, Kronthaler decided that “I wanted to make things uncomplicated, unfussy, clear and clean – because that’s what I care about at the moment, what I find important.” So, for this season’s condensed collection, humble fabrics were piece-dyed with vegetable dyes (he far prefers red onions to synthetic chemicals), and cut into slightly sculpted sweatshirts “that looked as though they’d been washed a hundred times and dried in the sun.”

Khaki linens were tailored into casual yet remarkably elegant shorts suits; T-shirt jersey into blazers. “You can put it in the washing machine but it’s about being respectful to this sort of material,” explains Kronthaler. “You can buy a T-shirt made of it for two quid – but still you have to grow it, it needs water, and it’s a beautiful fabric.” Evening dresses draped in linen became “rather glamorous little numbers,” proving that, in the right hands, almost anything can appear fabulous.

During a time when this industry is reconsidering its frenetic pace of production and consumption, the sustainable mantras that Kronthaler and Westwood have long been preaching have finally found fashion’s favour – but, as often is the case, the originals still do it best. Here, the designer explains how he decided to present this season differently – through a series of videos and photographs shot on his iPhone – and why he and Vivienne sought solace in Taoist poetry. 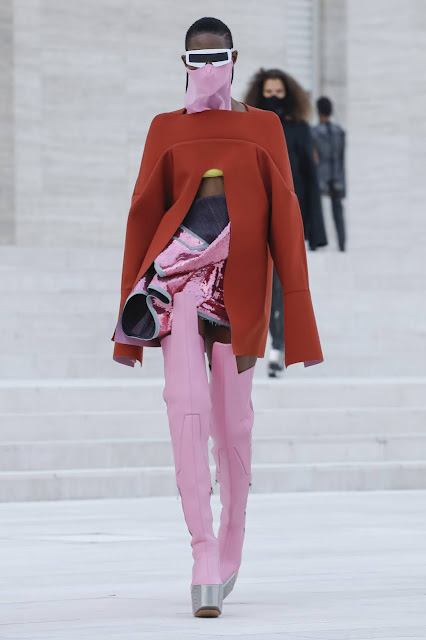 How does it feel to be skipping fashion week after so many years showing on schedule in Paris?
For 30 years, we have been going to Paris to do shows – this autumn would have been our 30th anniversary. 60 collections and I have never skipped one – but there is something deep inside of me that is quite glad because we have always wanted to break this cycle, but somehow didn’t. Now, the decision was made for us. I miss it – the stress, the energy, our friends. But it didn’t feel appropriate – so instead we decided to do this virtual thing, and anyone who was in London could come by and have a look at the clothes.

You photographed the collection yourself?

One week I thought, let’s go to the studio, just us two, to photograph in a white space. It was a very natural and organic follow-up to what we’d done this summer. Vivienne was happy with the pictures, so the next time I thought, let’s do a bit of make-up and hair. Consider it properly. But I didn’t want to shoot this whole collection on Vivienne – that felt too much – and while I was thinking about casting, Sara [Stockbridge, the model, actor and author] called me, out of the blue, to catch up. I said, ‘We’re doing these pictures at the weekend, would you like to come and spend the day together?’ It all just happened like that, and then there we all were, having a lovely time on a Sunday.

What was the thinking behind capturing yourself, Vivienne, Sarah and Vita [Leandra] reading Taoist poetry to camera?

In lockdown, I didn’t read any books or watch any films or listen to music. It felt a bit indulgent, and I didn’t feel like I was on holiday. I started a few books but I didn’t connect with them. But I sometimes read poems, which somehow spoke more to me, and sometimes Vivienne and I would recite poems to each other in our tiny little back garden. She is very much into these Chinese Taoist poems and I thought, why not do a little video where we wear the clothes and recite them: these three girls, and me? So, the idea was just to film us naïve and lo-fi on my iPhone. I like that quality, and I was very aware of it – but also I didn’t want another team recording. There were only eight people on set, including models, hair and make-up. Because of Vivienne [Westwood is 79], you know. We didn’t want it too crowded.

You have made this collection more concise than ever before: Why did you decide to edit things down? Did it change your way of working?

To me, personally, it wasn’t such a big change because I have always created things in a very limited way, with very strict codes. And, luckily, I had more or less designed the collection before Covid-19 started and then, when it started, it was about to be made in Italy and I was just in time to be able to reduce it even more. To break it down to what’s really important. And it’s enough: it’s really enough. It might not be enough to do a fashion show, but just to play with, you can do anything you like.

The Union Jack print has snuck in – why did that make the cut?

It was something to do with England: it is my favourite flag because, every time you cut something with it, it makes all these interesting patterns – stripes, or diagonals. I am not a patriot – I am not even English – and neither is Vivienne, although she is a very English person. But it was a bit about eccentricity. And this flag I used is a really good one – I have these friends who are the descendants of Nelson, and this is his original flag that they lent to me and I photographed and printed. It’s this extremely beautiful 200-year old, weathered flag with this beautiful patina. And when you see it turned into pants or something, it looks quite abstract but in very nice colours.
Posted by FASHIONmode News at 5:37 PM