“Times are changing,” says Florence, the 28-year-old model who makes her British Vogue debut in the October 2020 issue. Her words echo the message of the Scott Trindle shoot, which celebrates the resilience and creativity of London’s new flock of design talent, and sees the masculine-presenting model styled by Kate Phelan in looks by three menswear designers: Samuel Ross, Bianca Saunders and Craig Green.

Despite having appeared in Jack Wills campaigns when she was younger, Florence had assumed the solid sense of self she developed in her 20s was incompatible with the high fashion world. “When Tori [Edwards at Tess Management] scouted me I was like, ‘You’re not going to want to work with me. Trust me. I’m really particular,’” Florence said over the phone, explaining that she doesn’t “do” dresses, skirts, heels, or anything traditionally considered feminine. “I don’t think it’s fussy, but to a traditional model agent it is,” she said. Still, “Tori looked at me and was like, ‘What’s the problem? We can make this work for you.’”

As a result, Florence and her agent discuss shoot briefs carefully before anything is agreed upon. “I don’t feel like I’ve earned my model stripes to become that collaborative with designers and stylists, but it’s always a conversation that I have with my agent,” the model explained of the process. “I think the more that people see that this is me, the more they will realise that there’s no point asking me [to work on certain briefs]. The clothing is really beautiful, but you’re going to get a really awkward Florence in front of the camera,” she laughed. “You actually won’t get Florence in front of the camera — sorry.”

Despite the impact of the pandemic on this season, Florence has been much in demand, following up appearances on the Alexander McQueen and Valentino runways last season by walking in the Jacquemus and Fendi spring/summer 2021 presentations. These are some of the most high-profile shows on the schedule, but Florence isn’t letting it faze her. “I think shows are funny,” she laughed. “It’s all fun. This is all pretty new to me, but I am 28, and I have been exposed to the world longer than those that go into modelling at a younger age. Everyone else at shows seems incredibly stressed, including the models, but I just try and not add to that.”

Instead, the laid-back Florence treats modelling as a horizon-expanding experience. “It’s really fun to meet new people, especially when you meet more and more like-minded people who are on your level. Whether that’s with their sexuality, how they want to appear, or even with the diversity we need on sets. It’s fun to be around.” 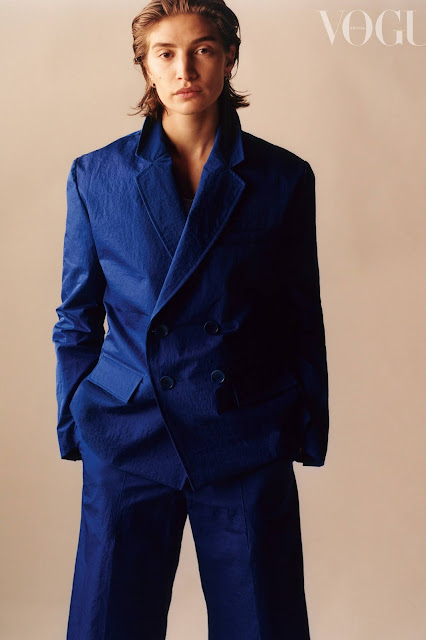 Though she’s embracing the opportunities that modelling has brought her way, she’s conscious of the environmental impact of the industry she’s now very much a part of. “I wish there was a more sustainable way of making it happen, and not so many flights,” she said. “We’ve got some thinking to do about how to make it better for everyone – and the planet.”

Exploring her own identity as a member of the LGBTQIA+ community has been key to the way Florence has approached her return to modelling after those early jobs. “[How I dress] is a really important thing to me, and since returning to what I’m comfortable wearing – which is what I wore as a kid and then ignored in my teenage years – I feel so much more comfortable within myself,” she said. “Clothing can have a huge emotional meaning, both outwardly and inwardly… I genuinely think everyone thought I was happy in how I dressed… I don’t think anyone thought I was insecure in how I looked.”

Identifying how she wanted to present involved an element of starting from scratch when it came to her wardrobe. “It was always something I wanted to explore, but I didn’t know where to start,” Florence said. “It was a process of clearing out my wardrobe, and finding ways of shopping that worked for me – which ended up being charity shops.” The pre-loved buy that proved most pivotal was a men’s suit she snagged for £2, said the model. “I realised that I can wear men’s clothing, and that is okay.”

According to Florence, her look became “too fashion” and stylised at one point, but now she’s found her groove with a capsule wardrobe of simple separates. “It became a little bit obsessive for a year or so. Now, it’s pretty simple. It’s about what version of Flo I want to be today. I really love getting ready and dressed up now. It’s just been a process.”

When it comes to fashion inspiration, Florence relies mostly on her own instincts. “I try not to think about anyone else,” she said. “That doesn’t mean I don’t think there are people who have great style – there are so many people out there who do. [But] I try and go with what I feel comfortable with, rather than replicating something. That’s when you run [the risk of trying to be] something you’re not.”
Posted by FASHIONmode News at 5:21 PM