If you’ve adapted to this season’s mix of digital and physical fashion presentations by now, well, you might be the only one. But the show must go on and Paris Fashion Week is shaping up to follow the template set by Milan: a combination of runway shows, short films, and everything in between. Get ready for the return of some of fashion’s biggest brands and the wistful absence of others. It’s all part of the most unpredictable season in history. Welcome to the last chapter of spring/summer 2021. Do make yourself at home.

After a digital haute couture presentation, Chanel is back on the runway – guests and all – followed by a Louis Vuitton runway show, both on Tuesday 6 October. Meanwhile Maria Grazia Chiuri, who soldiered on with her cruise show in Puglia this July, will host her post-lockdown Christian Dior show with attendance on Tuesday 29 September.

Kenzo and Balmain are taking to the catwalk on Wednesday 30 September, joined by Chloé and Isabel Marant on Thursday 1 October. Hermès follows suit on Saturday 3 October, and Paco Rabanne will host a presentation on Sunday 4 October. And Gabriela Hearst relocates to Paris from New York, also with a runway show on Sunday 4 October.

Matthew M Williams makes his debut at Givenchy with a digital presentation on Sunday 4 October, joined by Balenciaga – also digital – on the same day. Maison Margiela will unveil a digital project on Tuesday 6 October, preceded by Miu Miu on the same day for which Miuccia Prada will stream a show experience from Milan. 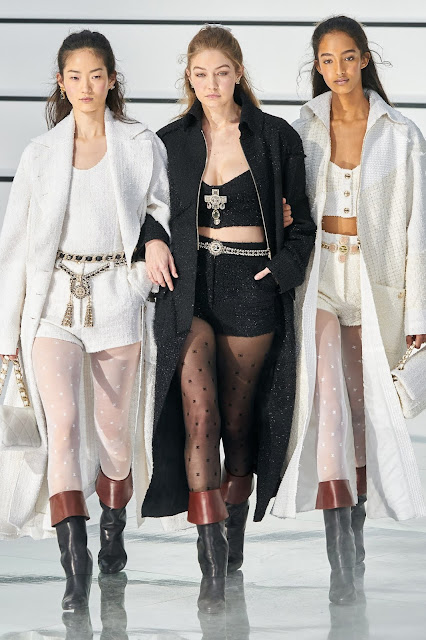 Similarly, Rick Owens will put on a livestream from Venice – where he owns a home – on Thursday 1 October, a day that also features a digital presentation by Kenneth Ize. Staying in Antwerp, Dries Van Noten is choosing to present digitally on Wednesday 30 September.

Ah, where do we begin? We’ll have to wait for traditional Paris Fashion Week highlights such as Celine, Saint Laurent, Alexander McQueen, Off-White, and Lanvin, while Valentino, which traditionally shows in Paris, has already presented its show in Milan.
Posted by FASHIONmode News at 4:58 PM