25 Years In, Dsquared2 Releases An Anniversary Capsule & Rehashes Some Hits

Most seasons, immediately after their fashion show, you will find Dean and Dan Caten backstage in the heart of a human hurricane. Typically they will be wearing some outrageous footwear, juggling flutes of Prosecco, and navigating a sea of model hugs and editor questions.

Not this season. Thirty minutes after this week’s spring/summer 2021 “show,” delivered digitally on their Dsquared2 platforms and via the Camera Della Moda site, the Catens could be found sitting by the pool at their rooftop restaurant on Via Ceresio, chilling. Dean was in retro sneakers, chinos, and a Maple Leaf hoodie; Dan in black leather oxfords, chinos, and a fine-gauge navy knit. The most high pressure decision they faced was: still or sparkling?

Our meeting was scheduled to discuss a new capsule collection marking the Toronto-born twins’ 25th year in the game. But before looking back we started in the moment. 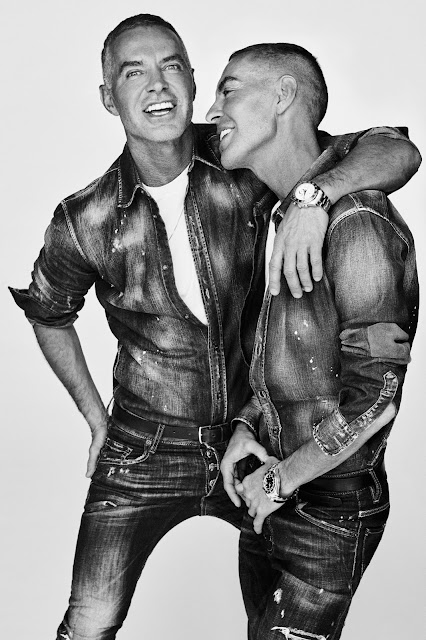 So how did this new virtual designer experience compare to the usual runway hoo-ha?

Dean: “There’s less drama, less exhaustion, less of a crowd, less trouble, less room for mistakes – I like it! I’m much happier.”

Dan: “I disagree. I feel a lack of energy that comes with doing a live show. In the city too; where’s the buzz? It’s fashion week and it feels like nothing is happening. There’s no hype, no buzz, and I feel sad about it. Look, for now, it’s fine. It will work this season because of what we have to deal with means that this is how we have to do it. But I don’t think I would stay like this forever. I’m bored and I think all the people are bored with looking [at shows] on fucking computers. Give me reality!”

So it feels like a while since we saw your anniversary show in January.

Dean and Dan, simultaneously: “It does!”

How has the interim changed your outlook?

Dan: “It’s affected our outlook on what is necessary and what is not, and made us sensitive to waste. I think we’ve become less excessive and more focused on our message. I think…”

Dean: “Spending three months together in the same room! We were in a bungalow in Cyprus.”

Dan: “And actually a very cute collection came out of that time. We were just together, washing the dishes, taking turns to who would wash and who would dry. We chatted a lot more, we spent real time together, and we were allowed to go outside so it was great.”

To both of you, what’s become better in the fashion world over your 25 years in it, and what developments are you less enthusiastic about?

Dan: “Well, time works. So we’ve become better ourselves at doing this. You gain experience.”

Dean: “And there are more options. In the past you had to look a certain way, but now there are so many choices you can make and so many places you can fit in. The only thing I see as being on the dark side is that the energy of the kids wanting to come into the shopping experience has declined. We used to love getting up on a Saturday morning and going shopping with a bunch of friends. We especially loved Creeds – that was the chicest.”

Dan: “We didn’t have the cash – we just wanted to be there! And I guess today there isn’t that excitement. And if you want something you just click and you get it.”

Tell us about this anniversary capsule you are about to release?

Dan: “Where the runway collection was more history-oriented, looking into some of the key moments in the story, the capsule is more product-oriented. It’s fresh and cute, and features a ball logo and a countdown logo, both of which we really like.”

What do you each count as the most significant moment in Dsquared2’s fashion history?

Dan: “Madonna! She was someone we were super in awe of. We were super fans. So it’s kind of amazing when she comes to you and asks you for something. Then what we ended up doing with her was a lot, and it was kind of like, excessive. She asked for one thing, then, can we do this? Can we do this? Maybe also this? She asked for a lot. But she ended up using all of it, which is pretty unusual. It was a great stamp of approval for us because it’s like the world said: OK, she thinks they’re cool or interesting, so now let’s go check it out. It was a big door opener. The working with her in person was great, because she knows what she wants.”

Dean: “I remember she said, ‘Stage is stage, and if you’re in the front row, you can see that I’m wearing a leather rodeo shirt. But if you’re in the back, you just see the silhouette, so the silhouette is crucial on stage.’ This led to turning point number two, which is that it gave us the confidence to do our first women’s show. And Naomi agrees to do the show. She comes in the night before and does voice overs: ‘Come on, don’t worry boys, I’m coming.’ And she runs down the runway with two Hermès shopping bags, throws them to the security guard at the bottom of the stairs, snaps her fingers, and the music changes to Missy Elliot…

Dan: “And we built the plane and had the fans – who were students, not dead front row people –and it was epic casting thanks to her agreeing to do the show. It was like a walk off! Backstage everyone was watching, yeah, it was like a walk-off ball. There was such an energy.”

You can’t do that with digital.