It’s well after dark in Tokyo, where Tomo Koizumi lives and works, and he’s rummaging through his apartment looking for something special. Eventually, he pulls out a lilac Emlio Pucci card case and displays it proudly on the screen of our Zoom call. “I found my old card case, which I want to show. It is really cute!” he cheers. The leather wallet is a little worn around the edges, the result of frequent use, and patterned in one of Emilio Pucci’s swirling prints. Call it a bit of fashion synergy — today in Milan, Koizumi is debuting his first capsule collection for Emilio Pucci.

The 11-piece collection fuses Koizumi’s exuberant ruffles with the fluid prints of the house. “I already got a lot of inspiration from Pucci designs, especially colours and colour matching,” the designer says. “I really love how Pucci uses colours, I feel like it’s all harmonised. That’s the biggest thing I got inspiration from with Pucci.”

With the house’s Vetrate print as a reference, Koizumi and his team in Tokyo began ruffling together shades of tangerine, coral, light yellow, and white into dresses that explode Pucci’s two-dimensional patterns into 3D creations. “It takes much more time than usual,” he says, noting the contrast between his own, often colour-blocked approach to pattern and the swirling Pucci designs. “But it looks really different and cute.” 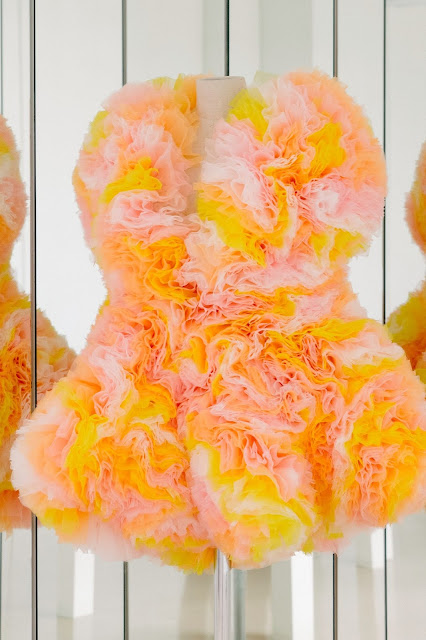 He continues: “I already had ideas about making [a more] Pucci style with my ruffle, so I tried it like that and it worked really well. I even want to try more different colours or different patterns. I really love these designs.”

Most of the silhouettes that Koizumi created for the Florentine brand are short and spunky — similar to the closing looks of his own spring 2021 collection. The egg shape, he said earlier this year, has been one of his more popular requests; here it’s rendered as a strapless mini as sweet as a gumdrop. There are also pure white full skirts and meringue puffs as a palette cleanser between the lemon and orange.

Koizumi will be traveling to Milan to oversee the installation of his collection and take appointments. Other than meeting with the Emilio Pucci team in-person for the first time, he’s excited to explore all Milan has to offer. “Gelato,” he says, “is my favourite thing.” A fitting dessert for a designer with the delightful sensibility of a confectioner.
Posted by FASHIONmode News at 4:23 PM