The day before Chanel’s SS21 show, the house released a one minute and 46 second-long teaser video. The white capital letters of the Hollywood sign had been replaced with the Chanel logo in an arty black-and-white film by Inez & Vinoodh that panned over a palm tree-studded LA landscape and suddenly morphed into Paris. Sure enough, clips of Romy Schneider in La Piscine, Anna Karina in Pierrot le Fou and Jeanne Moreau in Ascenseur pour l’échafaud – three of French cinema’s starriest leading ladies and most famous movies – were spliced with the city-panning shots. On the morning of the show, more film clips were released that captured the models Mica Argañaraz, Rianne Van Rompaey and Louise de Chevigny in “recurring cinematic situations”: on the telephone, looking out the window sitting on a bed or walking down the street.

The scene was set, then, for a cinematic Franco-fest at a relatively scaled-back Chanel spring show at the Grand Palais, in Paris. Six towering white letters spelling out the brand’s name, dotted with neon lights, were positioned on a white painted catwalk in front of which white scaffolding chairs had been arranged at an appropriate distance. The letters were an evocative symbol of both simplicity and might – and Virginie Viard took the opportunity to hammer home the house codes. “This collection is a tribute to the muses of the house,” she said. Here are five things to know about the Chanel spring/summer 2021 show. 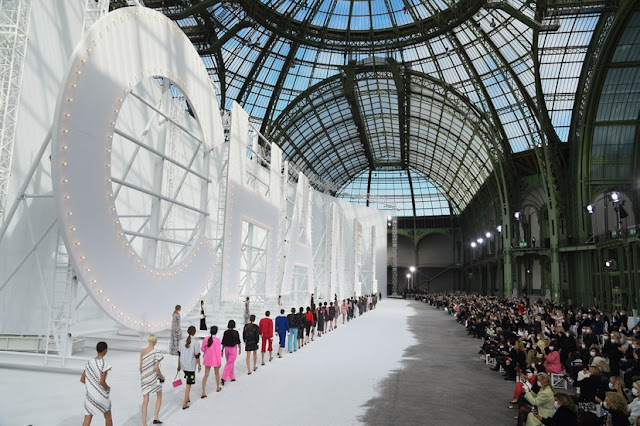 “I was thinking about actresses at the photocall, on the red carpet, that moment when they’re being called to by the photographers: their faces a little distracted, their attitude a little out of sync with the outfits they’re wearing,” said Virginie Viard. “This very lively side to cinema that happens beyond cinema.” In other words: life on the other side of the velvet rope, and one which Chanel has always had a big hand in defining. As the pre-show videos alluded to, Romy Schneider and Jeanne Moreau were famously friends of Gabrielle “Coco” Chanel, dropping in to her Paris apartment for tea and a fitting, discussing literature and lovers. And here, Viard showed everything a modern starlet might want in her wardrobe, from wide-legged jeans with a white Chanel-branded T-shirt with a bouclé jacket for popping to the shops, to an array of elegant, red-carpet-worthy evening gowns in black and white.

Pink denim was the surprise entry 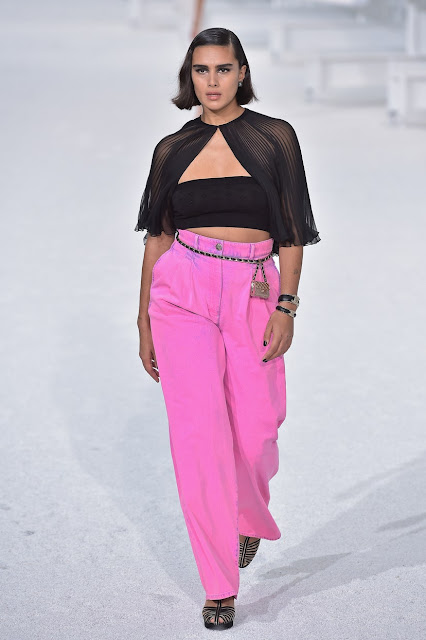 Amongst all the feather-dusted gowns and trailing plumes of chiffon were some surprises: bubblegum pink denim, for one. Amongst pink denim jackets and quilted bags, Jill Kortleve showed off the high-waisted pink jeans to their best advantage, paired with a black bralette (another major trend for spring), a sheer cape and with a mini Chanel bag strung on a quilted chain strap around her waist. Note, too, the return of the Chanel T-bar sandals.

The jewellery was a highlight 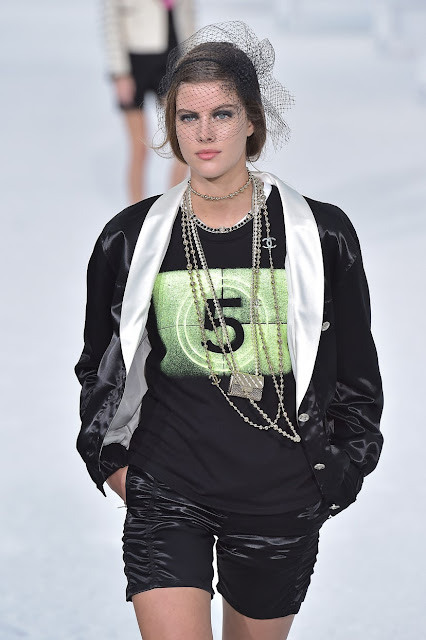 Needing to spruce up a tired T-shirt? Layer up Chanel pearls and chains. As for a classic black pencil skirt? Try a pearl-and-rhinestone-studded chain belt slung across the hips. Chain-link leather chokers are easy-chic partners for black off-the-shoulder dresses, and a cream tweed short suit really should be worn with bows adorning the pockets, and a mini bag on a string of pearls dangling from the neck.

Chanel isn’t giving up on glamour 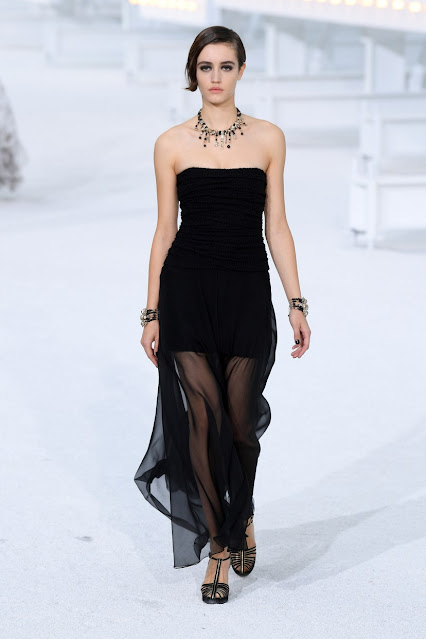 Trackpants? Please. Refusing to bow to potential pressure to reveal a collection entirely made of Chanel loungewear for all those double-C customers in plush lockdown situations, Viard sent out gowns destined for the red carpet, and the red carpet only. The first look out was a floor-length dress with an asymmetric neckline, paired with heels and a netted hair piece, with bows at the wrists. Elsewhere there were tweed and chiffon creations sporting a key detail and a micro trend we’ve seen elsewhere this season: cape detailing, which wafted in statesman-like fashion behind models as they walked.

The shoes had a retro vibe 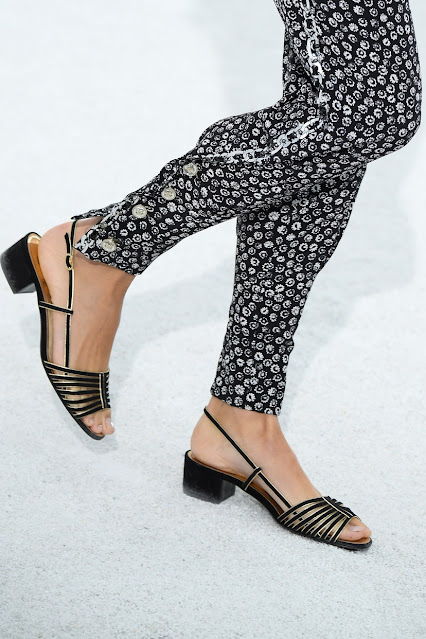 Woven slingback sandals – the kind Schneider might have worn in La Piscine – were paired with multiple looks, lending a French-girl summer insouciance to the proceedings. Elsewhere, Viard brought back heeled T-bar sandals reminiscent of a style Keira Knightley, a face of the house, used to favour, back when she frequented the red carpet on the regular.
Posted by FASHIONmode News at 6:01 PM