At this time of year, in addition to the resolutions and intentions, the winds of change blow in a flurry of fashion forecasts for the seasons ahead. Some are discarded by the end of January, while others stick. In the world of jewellery, 2020 will see fine jewellery for men become one that sticks.

Over the course of the last century fine jewels haven’t been culturally associated with men, but that’s changing fast. Jewellery is transitioning, and new styles won’t be gender specific. Boys are reclaiming the role of the Regency dandy, exploring jewels to add character and reflect their personality. In particular, fine jewellery brooches, pins and clips will be a major trend, fastened to more and more lapels and collars.

The first rumblings of this trend were felt at couture week in Paris, where Boucheron introduced its white diamond Polar Bear brooch for men, in addition to the Jack Box collection of 26 gold pins to be worn individually or, for the man keen to make a statement, all at once. 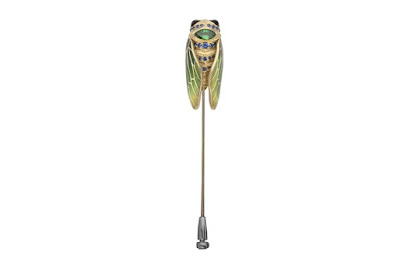 This was closely followed by New York designer Ana Khouri’s show at Phillips Auction House, where men were styled in emerald cuff earrings. In the past, men have often focused on jewellery featuring traditionally ‘manly’ motifs like weapons, military insignia or skulls, but now they are investing in precious stones and beauty. Like the inverted black diamond double finger rings created by Brazilian designer Ara Vartanian, whose male clients ask for their birthstones to be included, Nikos Koulis’s diamond and emerald pins, Messika’s Move Titanium diamond bracelets, or Shaun Leane’s charming yellow gold beetle brooch.

“After a long period of men being afraid to express their personality through jewels, they are becoming more experimental,” says Leane, approvingly. “When we look back at Elizabethan times, men were just as adorned as the women were, as [jewellery] symbolised fashion, status and innovation.” Increasingly, Leane receives design commissions for bespoke gemstone brooches from men eager to accumulate conversation pieces.

“A brooch is an artful form of self-expression,” agrees Colette Neyrey, designer of the new Maison Coco blackened jewels adorned with diamond studded subversive messages that are being snapped up by both sexes at Dover Street Market. “So, when I see a man wearing a brooch, I know that he’s a very confident man... [he] certainly [knows] exactly what he wants, and there’s nothing sexier.”
Heting cicada lapel pin.

The trend was confirmed at Dolce & Gabbana’s Alta Sartoria show, where male models walked the runway adorned with brooches, ropes of pearls and gold linked crosses. The star pieces were a series of exquisite brooches secured on cravats, scarves and ties with Victorian-style gold chains, inspired by Caravaggio’s 16th century painting Basket of Fruit, which hangs in Milan’s Biblioteca Ambrosiana. The naturalistic depictions of the fruit in the painting came to life in elaborate gemstone and enamel mixes used to conjure ripe figs, pomegranates and grapes. 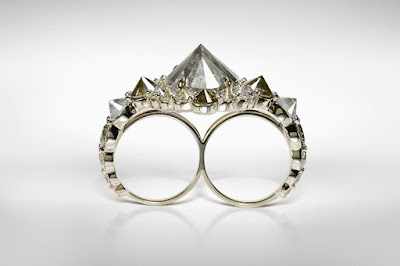 Ironically, Caravaggio painted the fruit to express the ephemeral nature of earthly things, while Domenico Dolce and Stefano Gabbana’s succulent brooches have been created as heirlooms to be passed down through the generations.

“Confidence is part of the current mood in menswear, so it makes total sense adding a pin to adorn the look,” says German designer Julia Muggenberg, who hangs Tahitian pearls and hard stones from gold brooches. “The pin has a reference to classical power dressing for the male, and by introducing colour in the form of a gemstone, they highlight fabric and draw attention to textures.”

Is there a danger of the girls being outshone? As in the natural world, where the peahen appears rather drab in comparison to her male counterpart, the peacock? Fortunately not, as these pieces suit all sexes. I’d happily wear Vogue fashion critic Anders Christian Madsen’s pearl choker, rings and bracelets, and he covets my diamond and gold Elie Top ring. Top’s Sirius collection features minimalist distressed silver and yellow gold cases on necklaces and rings that are ideal for daywear, but can roll back to reveal a hidden sapphire or emerald for serious sparkle when the occasion demands. He creates collections that are androgynous and timeless, that could have been created in the time of Charlemagne and yet are somehow futuristic. Women have long borrowed their boyfriends’ shirts, now they’ll be after their jewellery, too. This trend will make peacocks of us all.

Posted by FASHIONmode News at 7:59 PM