Now in its eighth year, the International Woolmark Prize has helped shape the careers of fashion’s finest across the globe. Judges have included acclaimed industry commentators, models and designers, and previous winners have included none other than Yves Saint Laurent and Karl Lagerfeld, who both won in 1954, the year after the prize was established (Saint Laurent was awarded the top prize for dress design; Lagerfeld for coats).

For 2020, it has been revealed that there will be a new award: the Karl Lagerfeld Award for Innovation, to honour the renowned designer and prize alumnus following his death nearly a year ago. It will be awarded to a finalist who “showcases outstanding creativity and innovation” and will be presented by the editor-in-chief of CR Fashion Book, Carine Roitfeld. 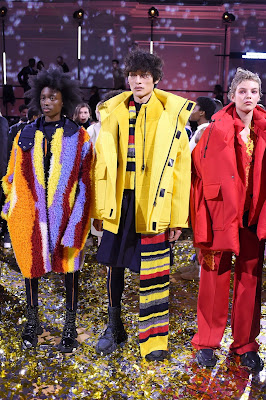 The prize is awarded to outstanding designers in the industry who showcase the “beauty and versatility of Merino wool”. This year, after choosing from over 300 applicants across 47 countries, 10 finalists were decided upon. The British label headed by Samuel Ross, A Cold Wall, is in the running, in addition to the flares-obsessed Irish designer, Richard Malone. Each finalist was awarded £47,000 (AU$70,000) following the announcement in October 2019 and have been creating collections before the awards ceremony at London Fashion Week on 17 February, where an overall winner will receive £105,000 (AU$200,000) and a second designer will receive £53,000 (AU$100,000) for the inaugural Karl Lagerfeld Award For Innovation.

Judges on this year’s panel include Editor-in-Chief at British Vogue, Edward Enninful who commented: “I am delighted to be joining this year’s judging panel for the Woolmark Prize,” adding, “supporting young designers is something close to my heart and I think it’s important that the prize both acknowledges credible new talent and champions the wool industry.” Enninful will be joined by other industry greats including the designer Kim Jones, the journalist Tim Blanks, the model Anja Rubik, the journalist Hamish Bowles and the British Vogue cover star and academic, Sinéad Burke.

Posted by FASHIONmode News at 4:25 PM