Renée Zellweger, Giorgio Armani and celebrity super-stylist Petra Flannery began plotting the Judy star’s Golden Globes 2020 dress in the autumn. “We embarked on a journey to find just the right shade of blue,” Flannery tells British Vogue. Fast forward to 5 January, and Zellweger, a vision on the red carpet wearing an Armani Privé blue silk cady bustier gown with crystal-embroidered piping, proved that their meticulous journey through the Pantone books was worth it. 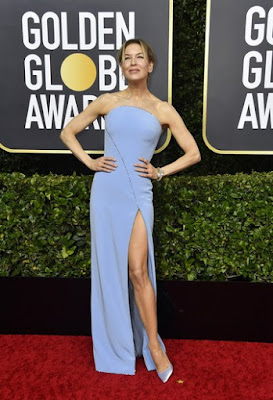 “Armani exemplifies Hollywood glamour, yet always adopts a modern approach to dressing,” Flannery says of her client’s choice to work with the Italian house. “The shapes are often sleek and statuesque. This dress in particular exudes these qualities with its column silhouette and half moon curvature at the top. The polished and graceful details mirror Renée’s style.”

Zellweger, who “loves a statement piece when it comes to jewellery”, was particularly taken with the finite precision of the crystal trim on the gown. “It’s truly magnificent,” smiles Flannery. Together, they selected a David Webb yellow gold and diamond bracelet for “the perfect touch of shine to complement it”. One can imagine Judy Garland, the character for whom Zellweger received the Best Actress award, would also approve of these decadent embellishments.

Posted by FASHIONmode News at 7:29 PM