Could You Give Up Buying New Clothes In 2020?

Traditionally, I have not responded well to abstinence. Though the season of restraint and giving things up is now upon us, my idea of resolutions for the new year doesn’t normally include Dry January, Veganuary, or other such virtuous projects. Instead, I have tended to adopt the principle of moderation, a system which has always served me well in justifying Burns Night cocktails, or the ubiquitous winter sales.

As the ongoing climate emergency makes explicit, though, in certain contexts the time for gradual reform is running out. With regards to the escalating ecological disaster and what the fashion and textile industries can do to mitigate it, change has to be drastic. The statistics are more than alarming; the worldwide damage to water supplies, forests and carbon quotas unremitting. In terms of how we consume fashion, moderation is a luxury we can no longer afford.

When a friend suggested trying out Oxfam’s initiative, last September, of buying only second-hand clothing for a month, I had thought it would be easy. In reality, I had not realised the extent of my dependency on big-brand online shopping. Technically, I failed in the first week: four days into the challenge, I had a job interview, and panic-bought a corduroy boiler suit which I hoped would make me look capable. (That I already had two boiler suits in my wardrobe, albeit in black and white, and not burnt orange, I filed under “irrelevant”.) When it came - swiftly, neatly packaged, obtained without any effort on my part beyond clicking the right buttons, I felt like a cheat. I re-wrapped it in its plastic packaging and took it to my local Post Office, where the staff on duty shot me wearied nods of recognition. Paying a not insignificant amount to ship it back to the relevant warehouse didn’t exactly enhance the experience.

I held it more or less together for the rest of the month, buying only a Matrix-style, vintage leather blazer on eBay. Still, when September ended, I was relieved to go “back to normal”: to buying marked-down items without really thinking, to hungrily clicking on particular pieces on Instagram and seeing if they were on sale. This “business as usual” approach, criticised so effectively by Extinction Rebellion, was not only basically tone deaf, but also, not enjoyable. I didn’t know what was really in my wardrobe. Instead, I was on a kind of permanent merry-go-round of promotional emails and voucher codes. I was addicted to novelty and quick-fix consolations, which are usually a death knell to real personal style.

Near the end of Greta Gerwig’s 2017 film Ladybird, there is a scene in which the titular character and her mother bicker in a thrift store. Marion, who works as a nurse on an over-subscribed psychiatric ward in Sacramento, California, berates Ladybird for slouching and dragging her feet as they flick tensely through the rails. Their argument escalates, until Marion comes across a 1950s gown in immaculate condition. “Isn’t it perfect?” she asks her daughter, softening. “I just love it!” Ladybird replies, all trace of their previous conflict having disappeared. 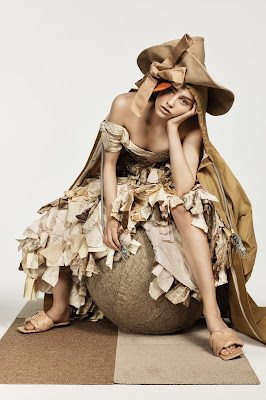 I can relate to this exchange. Scouring charity shops with my mother is something I have done since I was a teenager, mostly willingly, but occasionally coerced: “Let’s just go and have a look” always the departing rationale. In the privileged north London suburbs, we’ve found Cacharel and Dries Van Noten, impeccable silk scarves, and, borderline incredulously, a Chanel bag we once spent an entire weekend studying for signs of fakery, armed with niche handbag blogs and YouTube authentication videos (spoiler alert: it might not be real). The activity of browsing for second-hand clothing, the flashes of excitement; the wicker baskets of half-broken costume jewellery; the victory-lap conversations with the volunteers behind the counters, is something I know well, but also, lured by shinier and quicker ways of shopping, not a habit I’ve tried very hard to keep alive.

With the ailing state of the planet at the heart of current industry conversations, it is luckily becoming easier to undertake a circular experience of fashion; to re-use and re-purpose already-existing clothes, rather than racking up more items destined for landfill. Resale sites such as Vestiaire Collective, Hardly Ever Wore It, Second Life, the Real Real, Depop and eBay, and vintage Instagram accounts including Imparfaite and Retold have been breaking through for a few years. A newer wave of initiatives including By Rotation, Hurr Collective and in-house services by brands such as Ganni are encouraging renting, rather than purchasing, both buzzy and more classic items for short-term use. It’s a timely solution to the dilemma of wanting to look nice for a wedding, but not wanting to invest in something that will only gather dust on your shelves, because nobody’s lifestyle involves confetti, champagne, and photo-booths more than a handful of times a year.

Given the urgency of the situation, some might argue that going one step further than #Secondhand2020 and committing to a total blanket ban on buying clothing for 12 months would be a more impactful, and necessary undertaking. But I still don’t know if I believe in total prohibitions. It’s more realistic to believe that I can still indulge the odd lapse into frivolity, even if hunting down the precise right shape of square-toe ankle boots will require a bit more effort than telling myself that all fashion purchases are stringently off-limits.

Two weeks into the new year, which would usually already be busy with the static of innumerable e-receipts and traipses to random parcel drop-off points in cycling-supply stores, I am already enjoying swapping Amazon for Etsy, and, in my own local charity shops, learning how the better fabrics – silk, wool, linen – stand out on the shelves. So far, it doesn’t feel like a drab, punishing exercise but a kind of sensory reeducation: making me appreciate and love clothes more than I already do. It doesn’t feel like a form of saying no to fashion, but a different way of saying yes to it. Except maybe not to those novelty costume earrings.

Posted by FASHIONmode News at 6:25 PM