From Ziggy Stardust to The Thin White Duke, David Bowie’s power to help change his persona through clothing led him to be known as one of fashion’s undisputed champions of self-invention. Hugo Boss’s latest capsule collection within its diffusion line Hugo, pays homage to him.

“David Bowie was a rebel spirit who lived life on his own terms,” says Bart de Backer, senior head of design at Hugo menswear. “This capsule is an opportunity for us to celebrate the impact he had on the world and the values that we share.” Comprising slogan caps, graphic T-shirts and jumpers, the limited-edition range, entitled Hugo Loves Bowie, comes in a red, black and white palette. 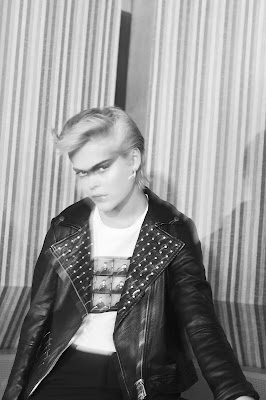 The brand has homed in on one specific reference point in Bowie’s critically-acclaimed career: his 1977-1979 Berlin Trilogy. The body of work consisted of three albums – Low, Heroes and Lodger – and was inspired by the German capital. The Hugo Loves Bowie collection riffs off Bowie’s album cover for Heroes, shot by Masayoshi Sukita in black and white. Better yet, several pieces have “Tomorrow belongs to those who can hear it coming” emblazoned across them.

Hugo – a sub-division which consistently draws inspiration from popular culture – has woven Bowie’s powers of self-expression into this unisex collection with modern twist. Shop the edit from 15th January in stores and at Hugoboss.com.

Posted by FASHIONmode News at 7:55 AM