Women’s football is now more visible and more popular than ever – thanks, in part, to USA co-captain Megan Rapinoe, who led her team to victory at last year’s FIFA Women’s World Cup. Not only has the American soccer star become synonymous with pink hair, she’s consistently used her voice off the field to fight for change. Is it any wonder, then, that she’s just landed her first luxury campaign courtesy of Loewe?

“I am so thrilled about this partnership with Loewe and Jonathan Anderson,” Rapinoe said of the ongoing campaign – a collaboration between Anderson, Loewe’s creative director, photographer Steven Meisel and creative studio M/M – which will be part of a series of billboards across Paris. “Multiple worlds crashing together, creating something bigger, different, and more exciting than either could alone. To me, the goal of a collaboration should not be to stand next to one another, but rather become something else, together.” 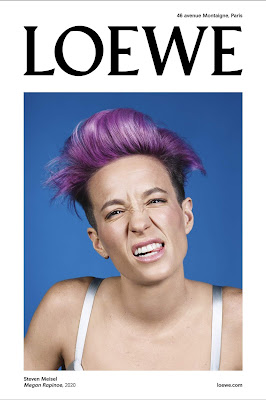 The collaboration sees Rapinoe pay homage to the victory face she makes on the field (her confident victory stance made multiple headlines last summer). The Meisel-captured image shows Rapinoe’s grinning face offset against a bold blue background, playing into the idea of bodily distortion.

“How do I feel? What do I want to convey for myself? With the exception of using my mouth, (fashion) is the chief way that I express myself every day,” Rapinoe told CNN of the campaign. “Any chance I get to do something outside of sport, particularly in fashion, I’m all over that. Particularly in the context of women’s sports, where I feel we’re very boxed in.”

Rapinoe has refused to box herself in as she continues to fight for equal pay. She has addressed the issue at multiple press conferences as the US team continues to sue its federation over equal pay and working conditions. So, for Rapinoe, collaborating with a brand such as Loewe was a no-brainer.

Posted by FASHIONmode News at 6:58 PM