Burberry is heading to Shanghai in April, where it will restage its Fall/Winter 2020 runway show with additional looks designed for and available exclusively in the world’s largest luxury market.

The show, which will take place on the 23rd at an undisclosed location, is a part of the British brand’s wider strategy to entice Chinese shoppers, who currently account for over one-third of the luxury sector’s worldwide revenues according to Bain & Company data. Other efforts include a Lunar New Year capsule collection and new tech-infused retail store in Shenzhen as part of its ongoing partnership with Chinese tech giant and WeChat parent company Tencent.

Though this will be the first time Burberry shows an entire collection outside Europe, the brand has previously staged shows in China in 2011 and 2014 to celebrate store openings in Beijing and Shanghai respectively. Brands like Miu Miu and Prada have also recently staged runway shows in the capital, whereas Chanel opted for Chengdu in 2017 and Fendi chose Beijing’s Great Wall as its venue in 2007. 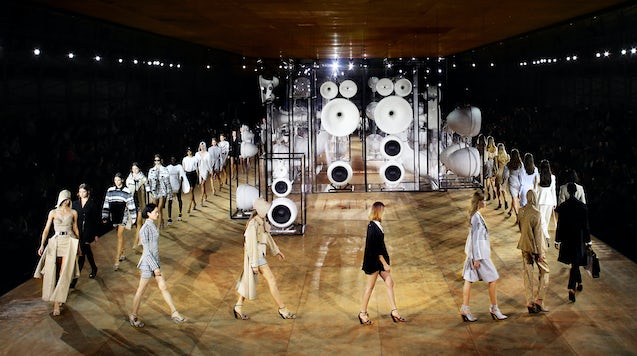 Last November, Burberry reported six-month earnings that beat estimates, despite sales seeing a double-digit decline in protest-ridden Hong Kong, where Burberry wrote down the value of its shops by £14 million ($18.3 million). Mainland China, where it currently operates 61 stores, will be more critical for its performance than ever before.

The Chinese market has long been a bright spot for European luxury brands, but an ongoing economic slowdown has threatened to weigh on Burberry’s ambitions. Though China’s gross domestic product (GDP) is growing at its slowest pace in three decades, de-escalating tensions between Beijing and Washington after this week’s “phase one” trade deal could whet consumer appetites for high-end goods.

“The point here is to capture the limelight, and become or stay relevant to consumers in the most competitive environment,” said Bernstein analyst Luca Solca, who reckons that it will ultimately be up to Chief Creative Officer Riccardo Tisci to cement Burberry’s ‘must-have’ status in the region. “Most luxury brands have yet to reconcile how to run a [China-focused] business from Europe. This may be an innovative first step.”

Posted by FASHIONmode News at 6:21 PM