Later in life, Gabrielle “Coco” Chanel never referred to Aubazine, the austere Cistercian abbey where she grew up, as an “orphanage”. Instead, she called the Catholic nuns who raised her “aunts”, whom she recalled as “good people, but absolutely without tenderness”. While it was an unhappy childhood, she appeared to have soaked up the stark simplicity: whitewashed walls with black doors, white shirts and black skirts. That simplicity came to define the haute couture spring/summer 2020 collection, designed by Virginie Viard, and informed by a visit the designer had paid to the medieval abbey. Here, everything you need to know about the latest Chanel show. 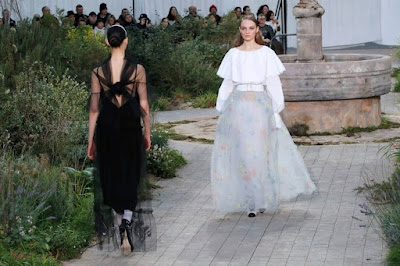 Under the dome at the Grand Palais, Virginie Viard recreated the cloister garden at the Abbey of Aubazine, the orphanage where at age 11 Gabrielle Chanel was deposited by her father, with her two sisters. Chanel spent seven years of her life with the nuns, wearing white blouses and black skirts. Upon her visit, Viard fell in love with the rustic, unkempt charm of the walled garden and felt compelled to reimagine the scene, complete with red-brick paving, a water fountain and a clothes lines pegged with vintage white linen tablecloths – inspired by the sewing the orphans undertook every evening. “What I immediately liked was that the cloister garden was uncultivated. It was really sunny. The place made me think of the summer, a breeze fragranced with flowers,” she said. “What interested me in this decor was the paradox between the sophistication of Haute Couture and the simplicity of this place.” 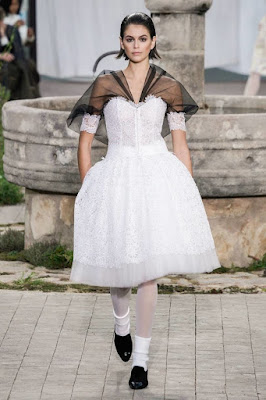 Life at the abbey no doubt shaped a young Gabrielle Chanel’s tastes – the stark black skirts and white wimples of the sisters walking through the courtyard likely informed her elegantly austere palette. The collection was almost entirely monochrome, with the odd soft pastel exception, from houndstooth skirt suits and streamlined dress coats to bouclé ivory and sequined gowns. All looks were accessorised with white opaque tights layered with folded white ankle socks, intended to evoke the naive look of pupils. “I liked this idea of the boarder, of the schoolgirl, the outfits worn by children long ago,” said Viard, who also slipped flat pleated skirts, white smocks and bibbed or Peter Pan collars into silhouettes. 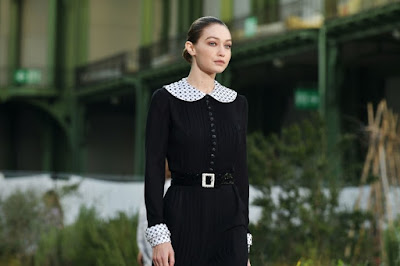 The nun’s wimple headdress and habit informed necklines and collars throughout the collection. From white swooping panels atop ankle-length evening gowns, to dramatic flared collars on suiting and delicate tulle layers nestling on top of sequined strapless dresses, this was a smörgåsbord of neck adornments that suggested old-world romance. 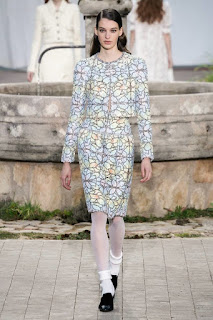 The stained glass windows and paving stones from the abbey formed the starting point for embroideries, the geometric loops in the windows suggesting interlocking Cs. So too, the garden’s flowers – from pastel-hued pansies to herbs from the kitchen garden. Needlework was an essential skill for the orphans: they sewed hems on sheets for their trousseaux. Such a history of craftsmanship was hinted at here, though elevated to exquisite heights by the Chanel petites mains.

And The Bride Wore... 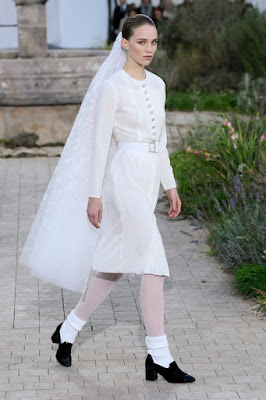 A belted, knee-length, crêpe-georgette button-down with pin-tuck pleats, crystal buttons and a triple Peter Pan collar in tulle, complete with a veil embroidered with branches of wisteria comprised the final bridal look. Those white tights and ankle socks also featured too. Viard cited the hemline as pure modernity.

Posted by FASHIONmode News at 4:35 PM