On Gianni Versace’s birthday, Donatella and her Versace team will be Stateside, presenting the brand’s pre-fall 2019 collection at a catwalk show in New York. It will mark the first time the brand has ever put on a show for the pre-fall season. To be held on December 2nd, the show is being kept hush-hush for now, with no details about the location available. 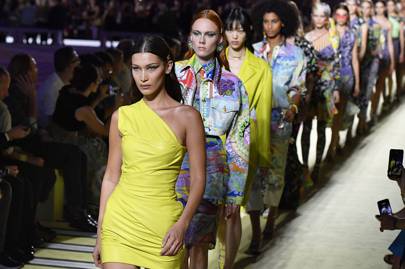 Versace joins the ranks of Valentino, Dior Homme and Chanel, all of which have announced pre-fall extravaganzas. Valentino and Dior Homme will show in Tokyo on November 27th and 30th, respectively, while Chanel will take over the Metropolitan Museum of Art in New York on December 4th.

According to reports, Versace’s New York show was long planned before the brand was acquired by Michael Kors Holdings (now Capri Holdings). The biggest change post-acquisition, we’d bet, is a Kors sighting on the front row on December 2nd.
Posted by FASHIONmode News at 10:56 AM