Everything You Need To Know About Moschino x H&M

On April 15, H&M confirmed its latest designer collaboration, with Italian fashion brand Moschino. News of the collaboration was first revealed late the evening before, at Jeremy Scott’s 11th annual party, held at Coachella music festival. The announcement, which is always one of the most eagerly-awaited on the fashion calendar, came via an Instagram live call from Gigi Hadid to the designer. Both were dressed in looks from the Moschino [tv] H&M collaboration, giving a first taste of the playfulness and colour - synonymous with Scott's designs - that we can expect to see from it.

"I am so excited about Moschino [tv] H&M," Scott said of the announcement. "My life’s work has been to connect with people through fashion, and with this collaboration I’ll be able to reach more of my fans than I’ve ever had the ability to do."

After Scott's long-standing collaboration with adidas ended in 2017, this partnership will offer fans a chance to snap up his designs again at a more accessible price point. Prices will range from approximately £25 to £300. “There’s a silver sequinned parka dress,” Scott told Vogue. “Denim pieces are all twisted into something else. Puffers and jackets are reconfigured into cropped things or double-long things. There’s a sportswear-with-evening kind of feeling, like a hockey jersey with a train.” 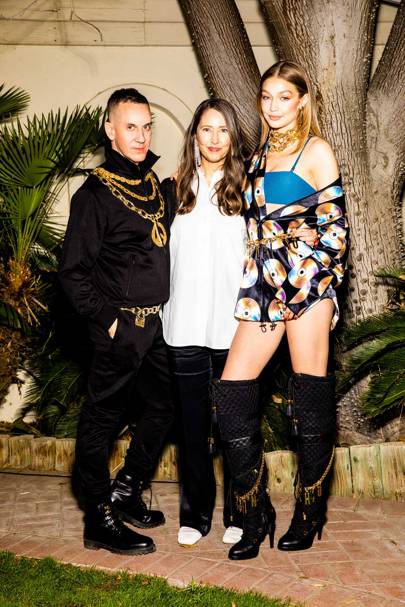 On October 6, H&M revealed the first images from the campaign, shot by Steven Meisel, which take inspiration from a 1950s salon show. Styled by Carlyne Cerf de Dudzeele, with hair by Guido Palau and make-up by Pat McGrath, the campaign features models Gigi Hadid (of course), Imaan Hammam, Vittoria Ceretti, Rianne Von Rompaey, Stella Maxwell and Soo Joo Park, lounging around a resplendent room, replete with gold chairs and a chandelier. The models are clad in plenty of gold, leather and chain prints, proving that the vibrant collection, available from November 8, centres on vivid patterns, metallic and sparkle. Jeremy Scott, who took to Instagram to unveil the images explained that he had "created this collection for the fans as my gift to them."

H&M's creative advisor, Ann-Sofie Johansson, said that the partnership is "the perfect collaboration for fashion right now" and mixes "pop, street culture, logos and also glamour". "Jeremy Scott is amazing – he knows how to have fun with fashion, and to connect with his fans around the world," she added.

Moschino will follow in the footsteps of the hugely successful 2017 Erdem collaboration, with a collection including womenswear, menswear and accessories. It joins an impressive history of fashion houses including Balmain, Marni, Kenzo and Versace that have collaborated with the high-street brand, since Karl Lagerfeld did it first back in 2004.

If Scott's vision for the collaboration doesn't already sound all-encompassing, the collection will also include pet wear. Yes, Moschino apparel for pooches. This will be the first time both H&M and Moschino have released clothing for pets.

The Moschino x H&M collection will be available online and in-store from November 8th.

Posted by FASHIONmode News at 7:13 PM