Sandra Amador, one half of Lady Gaga’s current styling duo, first met the pop megastar when she was running around in nude latex and prosthetics backstage at the 2011 Grammy Awards. Gaga was about to climb into a Hussein Chalayan egg, hoisted onto a wooden platform and paraded down the red carpet with several PVC-clad aides.

“Who is she?!” Amador asked herself. “I was so impressed by how fearless and daring she was. There was no one fusing music, art and fashion the way she was at that time. As a stylist, you couldn’t ask for anything more than someone who pushes the envelope.”

Amador has been working behind-the-scenes with Gaga for almost a decade. As a styling assistant of Brandon Maxwell, who, in turn, assisted Nicola Formichetti, Gaga’s personal design director from 2009-2012, she met Tom Eerebout, who was helping Anna Trevelyan, Formichetti’s other assistant. US-based Amador and UK-based Eerebout worked in tandem at the Haus of Gaga across different sides of the Atlantic for years. But when Formichetti passed the baton to Maxwell in 2012, the stylists got one step closer to Gaga.

It was the 2018 Grammys, however, that marked Maxwell metaphorically handing the reins to Amador and Eerebout. “Brandon has had more and more success with his fashion collections, so he needs to dedicate his time and focus to his company,” Amador explains. “He really pushed me to take on the leading role with Tom.”

Although nerve-wracking to have the weight of an icon’s image on their shoulders, Amador and Eerebout were used to Gaga’s pace. “There’s never been a limit of what you can achieve with her,” reminisces Eerebout of creating some 10 street-style looks per day when he first met her. “You can put any ideas on the table because she wants to tell a story. There aren't a lot of people that can pull off the things that she does.”

The timing for Amador and Eerebout to take over as principal stylists couldn’t have been more perfect. 2018 has been the year of Lady Gaga owing to her transition from stage to screen in A Star Is Born. And with a Hollywood blockbuster comes a global press trail that requires a camera-ready wardrobe befitting the Venice Film Festival and Los Angeles’ Shrine Auditorium alike. Just like her performance in the Bradley Cooper-directed biopic, it has been electrifying to watch. 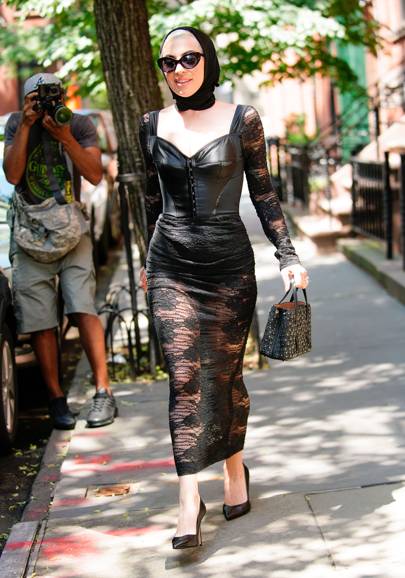 “We did so much research,” Amador laughs of the archive designs that consumed her and Eerebout in the months prior to the tour. “But we didn't have a clear theme, because we wanted to treat each event as a separate entity, and be inspired by the locations.” And so, Venice called for dramatic pink feathered Valentino, LA a statuesque metallic Givenchy gown and London a mass of ornate McQueen – “We felt we really needed to give Lee [McQueen] a nod as a designer we always look to for inspiration,” Eerebout explains.

Venice was career-defining for the duo. “The energy surrounding the premiere was on another level, there was thunder, lightning, rain!” Amador remembers. “I don't know that we will ever be able to replicate a moment like that. It was so intense, exciting, beautiful and surreal at the same time.”

Day-to-day, it is Gaga who starts the creative process behind a look by bringing her inspiration and “dreams” to the table. From there, it’s a collaborative process between Amador, Eerebout, hairstylist Frederic Aspiras and make-up artist Sarah Tanno. “We bring our individual research together and evolve the idea into something bigger than ourselves,” says Amador, before expressing time and time again that every outing Gaga makes is backed by hours of tireless teamwork.

Naturally, Team Gaga has had brands staking their interest in dressing the star for awards season. “It’s on our radar but we haven't quite started on anything yet,” Amador says tentatively. “It will be amazing if it does end up happening because, aside from her talent, what really makes her an icon is the fact she uses her platform for important issues. She doesn’t shy away from it.”

This feeling is replicated by hundreds of Little Monsters, her loyal cohort of fans, but also by the youngsters who make replicas of Gaga’s looks and share them with the stylists. “It's nice to feel like our work inspires other creatives to make art,” muses Eerebout. “Some of the designs are incredible – we always joke that they’ve stolen the outfit!”

It takes this quiet moment after the tour to realise how far the pair have come. “She’s given us an incredible opportunity to create something far beyond what we ever thought was possible,” Amador shares. “When we step away from it all and see the number of people her looks reach, and the number of people making sketches of what she wears, you get a sense of how impactful she is.” Gaga for the Golden Globe? Team Gaga more like.
Posted by FASHIONmode News at 10:47 AM