Lena Waithe is a self-professed sneakerhead. She owns over 100 pairs and they’ve become somewhat of a calling card for her and her unstudied, laid-back style (though she’d probably laugh at that description). Jeffrey Katzenberg’s short-form video company Quibi announced it is are green-lighting an unscripted series conceptualised by Waithe titled You Ain’t Got These, that promises to get beneath the surface of trainer culture and explore how sneakerheads and the dealers and companies they buy from are influencing class, gender, race and politics.

Waithe has never really fancied herself a fashion person, telling Vanity Fairearlier this year that she doesn’t “feel validated” by compliments from industry insiders or people who think she looks cool, and that she doesn’t “want to blend in... I try to wear queer designers who happen to be brown and making shit.” That’s the thing about Waithe, every move she makes, whether it’s wearing a pair of Nikes laced up on a red carpet, or a rainbow-coloured cape to the Met Gala, carries a deeper message. 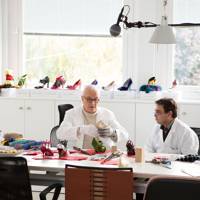 Waithe is outspoken about politics, race, and LGBTQ+ rights and her latest project promises to explore all of those themes through the lens of sneaker culture. Waithe will also capture the addictive personalities who thrive on getting their hands on the hottest kicks, as well as the self-expression that a single pair — or 100, in Waithe’s case — can foster. Details on the series are sparse at the moment, but with Waithe at the helm, it promises to be riveting and insightful. Waithe will no doubt teach us something thought-provoking and new, just when fashion folk thought we had it covered. That’s the coolest thing about her.

Posted by FASHIONmode News at 11:26 AM