Hedi Slimane’s debut collection for Celine might have polarised the fashion community, but that isn't stopping actress Dakota Johnsonfrom planting a flag on the red carpet in support of the newly appointed designer. After Lady Gaga teased Slimane’s new handbags on Instagram, Johnson became the first celebrity to wear Slimane’s Celine on the red carpet yesterday night, choosing a red sequined minidress from his first collection for the Los Angeles premiere of Suspiria. This isn't the first time Johnson has gravitated towards Slimane's designs. She was a fan back when he was at the helm of Saint Laurent. For the London premiere of Fifty Shades of Grey in 2015, Johnson took the plunge in one of Saint Laurent’s popular slip dresses — she wore a red version to the Oscars just two weeks later. 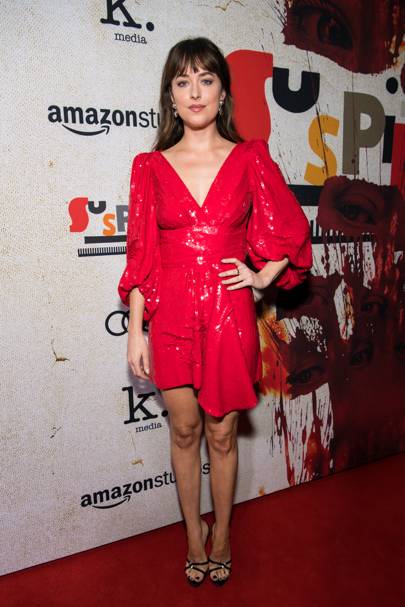 The bell sleeve dress is in keeping with Slimane’s design signatures: short, shimmering, with a plunging V-neck and a vixenish ruffle for an extra oomph of '80s glamour. What makes Johnson’s dress stand out — at least within Slimane’s work — is its colour. Amid Slimane’s parade of mostly black minis and suits, there were just six colourful dresses, and only one in red. It's also fitting that the star chose the bold hue as it also happens to be a leitmotif in the Luca Guadagnino-directed film. The actress kept her accessories simple, choosing romantic Sophie Buhai drop earrings and Giuseppe Zanotti sandals.

Posted by FASHIONmode News at 11:14 AM