What a whirlwind 24 hours it has been for Slick Woods. After joining Duckie Thot, Gigi and Bella Hadid and Paloma Elsesser at Rihanna’s Savage X Fenty lingerie show wearing nipple pasties and very little else, the pregnant model went into labour.

Fourteen hours later and, Woods wrote on her Instagram, “A king [was] born.” No, the rumour mill was not working especially hard at the end of New York Fashion Week, Woods, whose real name is Simone Thompson, had actually left Rihanna’s Garden of Eden Bidome and gone straight to hospital. “We hold shit down most of us don’t even know how much we’re going through,” her Instagram caption continued. “I can do whatever the fuck I want whenever the fuck I want and so can you.” After an underwear presentation that was a love letter to all female bodies, it was an apt closing statement.

Throughout her entire pregnancy Woods has advocated this attitude. She and her bump, who she previously declared would be a boy called Saphir – a play on September's birthstone – have been on the cover of magazines, and proudly posing on the red carpet at various fashion events, looking completely fabulous each time. 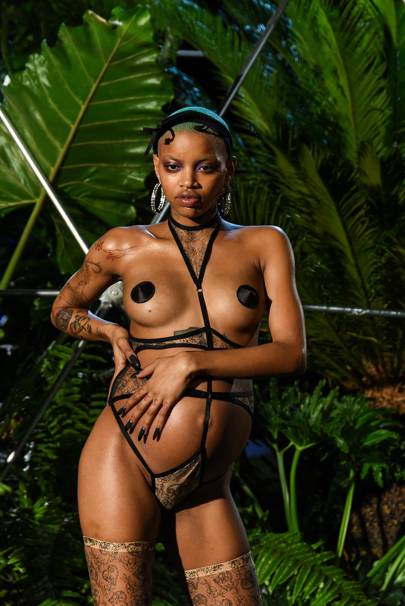 As she told Vogue in May, just weeks before she announced her pregnancy on Instagram, Woods puts herself out there to connect with her young supporters, who can perhaps relate to her life story. Now 22, she spent her teenage years living in a series of makeshift home set-ups between Los Angeles and Minneapolis with either her grandmother, her dog or her friends, and has been open about her drug use and time in prison. But she has always marched to the beat of her own drum and never compromised. “Nowadays, images are more tangible, and people feel like, 'Oh I can hang out with that girl', or 'That girl looks like my cousin, my sister, my brother',” she explained. “They don’t show your average beauty.”

Fellow model Adonis Bosso, who is the father of Woods's son, also confirmed the news of the arrival with an Instagram selfie, simply captioned, "fatherhood."

Posted by FASHIONmode News at 4:52 PM