If we had culture instead of consumption we would not be in this environmental mess, because we would have a different ethos,” Vivienne Westwood shared ahead of her spring/summer 2019 collection launch, which champions her longstanding belief that we should all buy less, and, accordingly, comes in the form of a digital lookbook to reduce the brand's carbon footprint. “My reference for this season also comes from the fact that I’m a Taoist and a terrific fan of Chinese art," she continued of her preoccupation with Eastern philosophies.

The five Taoist elements: fire, earth, metal, water and wood, and Chinese peony and dragon prints, all feature in some capacity, alongside Westwood’s deck of cards which, she says, are her “strategy to save the world [and] also a map for my designs.” Giant prayer flags baring card motifs seem to sandwich-board T-shirts and kilts, with splashes of camouflage interspersed – “because we are fighting right now to save the world; and punks love a fight”. It's bold and it's busy – just as we've come to expect from London's leading activist designer.

The starting point, however, was a vest – "the sexiest vest in the world" – which Westwood hopes her customers will wear with everything – perhaps with a pair of arm-warmers and thick socks, as she advises? Knitwear and tailored trousers also feature heavily – “we have every possible trouser in our collections, none of them are jeggings!” – but the iconoclast is particularly taken with her shirt offering. 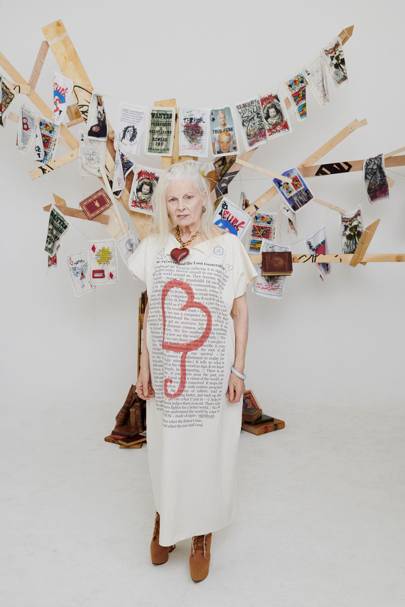 “Historically, the shirt is the thing you wore next to your body, you took off your jacket and you slept in it,” she noted. “Years ago, when I did my pirate collection, the core of that collection was the shirt – a shirt that had not changed in 500 years. It’s such a romantic garment, people wore it when they were buried, penitents wore it when they went to church to ask forgiveness for their sins.”

“When Charles II asked Lely (Peter Lely, painter to the court) to paint portraits of his mistresses, that’s what they wore, their chemise,” Westwood continued. “And they just dragged down the satin curtain and wrapped it round them - because he wanted them to look like a Greek goddess."

Eclectic as always, who can argue with the fact Westwood has chosen to skip a physical presentation in favour of an online launch when it comes with a side helping of history? See the pioneering British designer unpack her spring/summer 2019 collection further in the below video, browse the lookbook underneath, and stay tuned for Andreas Kronthaler's vision for the brand at Paris Fashion Week on September 29th.

Posted by FASHIONmode News at 4:45 PM