Aday after Burberry announced that it is going fur-free, starting with Riccardo Tisci's forthcoming first collection, the British Fashion Council has said that London Fashion Week this September will be the first of the major fashion weeks not to show any animal fur.

According to a survey carried out by the BFC, none of the designers on the official schedule have plans to use fur in the collections they will show next week. Chief executive Caroline Rush says that the move “highlights a trend we have seen over the past few years, with more and more brands deciding to use alternative materials to fur”, reports

"The BFC survey results reflect a cultural change based on ideals and choices made by designer businesses, international brands as well as consumer sentiment but also encouraged by the stance of multi-brand stores who are moving away from selling fur," the council reiterated in a statement. The survey is part of the BFC's Positive Fashion initiative, which is a platform designed to support industry best practice and encourage positive change under the pillars of sustainability, equality and diversity, and craftsmanship and community. 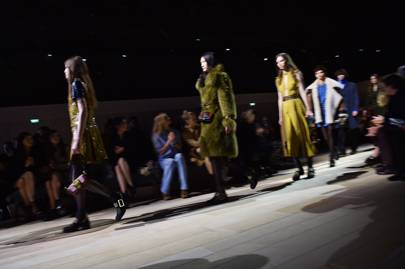 There has been a rise in recent years of anti-fur protesters at LFW - from 25 in 2016 to more than 250 during last September's shows, says The Guardian. This morning's announcement was welcomed by the Humane Society International UK, which has previously petitioned LFW to end its use of fur.

"This is a pivotal moment in the demise of the cruel fur trade," said Wendy Higgins, the organisation's director of communications. "It sends out a clarion call of compassion to the other fashion weeks in New York, Paris and Milan to similarly take a bold ethical stance, and it challenges too those designers still using fur to re-examine their morals. Fur cruelty is no longer welcome on the catwalk at London Fashion Week.

Posted by FASHIONmode News at 2:20 PM