The kiosks in Paris are receiving quite the fashion-forward face lift for the spring/summer 2019 shows. First Givenchy plastered logo stickers across the city inviting the public to its showcase, and now Loewe is taking Jonathan Anderson’s new-season campaign imagery to the pavements ahead of the September 28th show.

For Anderson the traditional model of releasing advertising campaigns closer to a collection’s sale date doesn’t work. He began unveiling his spring/summer 2019 vision for the Spanish house back in June during the menswear shows, and the upcoming Paris Fashion Week show and campaign preview marks a symbiotic continuation of the unveiling of his world at Loewe. But as one of fashion’s foremost intellectuals, Anderson also wants you to question what the entire image series even means.

“It’s about the idea of what is real – is the backdrop real, is the person real, is the idea of fashion real?” he tells Vogue over the phone from Paris. “It opens up the question of who we are and what we see ourselves as.” Cryptic? The three photographs are really quite brilliant.

The first Steven Meisel picture is rooted in the photographer’s self-portrait series, in which Meisel shoots models impersonating himself. In this spring/summer 2019 Loewe rendition, a behatted Nora Attal moonlights as Meisel in what Anderson refers to as “a psychological exercise”. “We wanted to get something about Steven’s iconography into the campaign,” he explains. “From the very beginning at Loewe I have had a very personal dialogue with Steven because I feel like this series is the bedrock of how we have articulated the brand.” 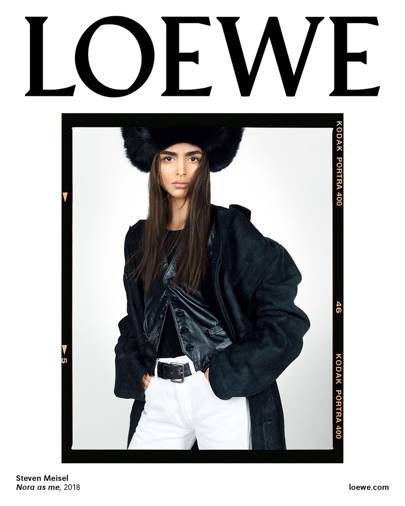 Having this sense of humour and irony in fashion is crucial for Anderson because, he says, it forces questioning. The second image shows three models posing in a port scene as a literal interpretation of the Spanish seaside references that thread through his designs. “It feels like a reality, but it’s actually completely fake,” he notes of the staged set-up. “There’s something quite amazing about building a world inside a studio and making it feel real. It harks back to the image that inspired me originally of kids on the beach in 1997 Italian Vogue by Steven. It’s the idea of something that’s hyper-realistic not being real. It’s important.”

The third visual is of the Gate Grid, a new black-and-white lattice handbag inspired by the Scottish artist Charles Rennie Mackintosh and due to arrive in stores mid-November. “Mackintosh is about individualism,” Anderson comments on the visionary he has referenced before at Loewe. “When I look at early interior shots of Mackintosh, and the idea of the white room that he proposed after the Victorian era, it was so shocking. Sometimes there has to be the element of the shocking for us to progress.”

A trio of images that encompasses references to the arts and crafts movement, the heritage of Loewe balanced with the spring/summer 2019 collection, and a heavy dose of irony – it has all the traits of a JW Anderson campaign. And, like his new collection, in which he reveals he has become “obsessed with silhouette”, can be digested as individual pieces or as a body of work.

“Fashion is about how we take ourselves out of reality, because then you can dream," he muses. "And when you dream you can project yourself forward.” There can be no doubt of the direction Anderson is propelling the brand. See his full spring/summer 2019 collection at 8.30am on September 28th.

Posted by FASHIONmode News at 5:09 PM