Who is Jeremy Corbyn’s stylist? He must have someone advising him on his wardrobe. For while the shifty suits remain at least one inch too large for his wiry frame, Corbyn’s certainly turned a corner in the long old road to chic. As one Twitter user commented after his confident performance on BBC1’s Question Time on Friday evening, it is a very skilled individual who has “turned the Corbyn look from a freight train-jumping hobo into a vaguely credible-looking adult”.

The employment of a stylist is not something Corbyn is likely to admit to, of course. “[Politics] is not a fashion parade, it's not a gentleman's club, it's not a banker's institute, it's a place where the people are represented,” he said crossly during an interview with Newsnight in 1984, given after he was criticised by a Tory MP for being “Labour scruff”. In said interview he is wearing a jumper knitted by his mum, and possibly one of his trademark £1.50 vests underneath, purchased from B & H Quality Underwear & Socks in Nag’s Head Market, north London. Savile Row suiting – or Amanda Wakeley leather trousers – this is not.

But like every politician thrust into the fishbowl, Corbyn has had to learn to use his garms to speak to voters. His insistence on an anti-fashion look – unruly hair and beard, gnomic beige shirts, mismatched suits without a tie – has been carefully eroded, and he has been coaxed into donning navy suits, smart white shirts and even a trusty red tie in an effort to appear statesmanlike. (He’s refused to lose the beard. Perhaps being the seven-time winner of Parliamentary Beard of the Year is a point of pride.) 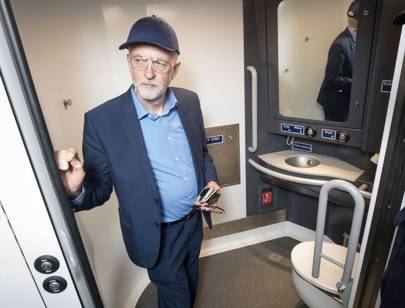 Crucially, however, he’s not jettisoned his “Eighties casual” habits. Corbyn is cognizant of our subtly shifting attitudes towards “men in suits” since Brexit. You will not catch him in one of the £3,500 Richard James suits favoured by David Cameron, or even a similarly priced Gieves & Hawkes suit that Gordon Brown was said to wear. Corbyn knows that the backlash against “experts” and the “establishment” means we’re also distrustful of anyone in a suit that fits (Donald Trump won an election on the same principle, though he now seems determined to reverse the result). The shoes are a little scuffed, too.

In his down time, Corbyn still enjoys sporting Eighties shell suits and Harrington jackets. It hasn’t escaped the attention of the Vogue office that such predilections are “very Vetements autumn/winter 2017". Here, we chart the foundations of Corbyn’s anti-fashion image.

Famously tie-less for most of his political career, Corbyn has been coaxed into wearing a red tie for the big moments. It's a concession that aligns him with the appropriation of corporate dresscodes Demna Gvasalia sent up on the Vetements catwalk. Perhaps Lotta Volkova, Vetements stylist, is behind this latest wardrobe twist?

The Socks And Trainers

Twisting conventions in terms of pre-existing wardrobe classics is a Vetements tic, but it's the deliberately naff styling here that marks out Corbyn's Sunday stroll outfit as on-trend. Black socks, extended to mid-calf, meet their match in black trainers. Touché.

An oversized silhouette is the foundation of the Vetements aesthetic, and while Corbyn doesn't go so far as to sport the quarterback shoulders of many a Vetements jacket, he does favour gigantic oversizing in the shoulders, crinkled fabric, and pooling trousers.

The fashion talking point to rival Theresa May's shoes, it's only a matter of time before Vetements collaborate with Ben Sherman to create the perfect Harrington jacket. Corbyn's stone tone has a whiff of Steve McQueen about it, especially in the context of his hot wheels.

A number of news outlets take great pleasure in calling this "Comrade" Corbyn's "Lenin" cap, and they've got a point - it's the "man of the people" prop that Corbyn most frequently reaches for. This ticks the "youth vote" box, being the hat that's currently enjoying its time in the style spotlight thanks to Kendall Jenner and Bella Hadid. It's also very 'politically-active student' - a key look on the Vetements autumn/winter 2017 catwalk.

A Vetements classic, elevated to high-fashion status by Gvasalia on the Balenciaga runway, nothing says "disruptive fashion influence" more than a nylon cagoule.

“My work is always about reality,” Gvasalia said, backstage at his Balenciaga menswear autumn/winter 2017 show. “It’s just honest. That is what’s happening around us.” The ill-fitting shapes, the corporate grey hue, the white vest and the safety-first cycling helmet: Corbyn's all about reality, too.

Vetements baseball caps added swagger to the spring/summer 2017 collection and have gone on to become a best-seller. Here, Corbyn appears to be inspecting a toilet on a train, but the cap gives it away. This is his audition to landing a spot on the Vetements catwalk. Demna, sign him up.