Thirty hours to go until the Hermès Club opens in Shanghai, and Bali Barret is padding through the chaos of the construction site. A diminutive woman with a leonine walk, she is dressed in the unofficial Hermès employee uniform: khaki shirt, cropped white jeans, thong sandals, multiple Collier de Chien studded bracelets, (polka dot) silk scarf. She appears remarkably calm, though insists: “Inside I am not relaxed.” She has reason to fret: tomorrow night, 1,000 members of the Chinese elite are due downtown, and the Club is nowhere near complete.

The Hermès Club, a one-night-only event designed to wow the brand’s Chinese clientele, is Barret’s current fixation. But there are many others. As artistic director of the Hermès Women’s Universe, Barret has ultimate design control over the womenswear, accessories, scarves and jewellery, making her one of the most senior (not to mention busy) women at the 180-year-old house. Also in her remit are the Women’s Universe events, customer-focussed extravaganzas that began five years ago and take place across the world. This latest is a 1,000-person party that’s been six months in the making, and designed in collaboration with Jean-Paul Goude – he of the famous Grace Jones album artwork, and, latterly, the Kim Kardashian ‘break the internet’ portrait.

It’s a long way from designing silks, Barret’s first role at the company, undertaken when she produced a capsule collection of scarves in 2003. “It’s like being a movie director,” she nods, as she takes me to view the site at Shanghai’s Long Museum. “I am a designer; really, my job is all about creating things. This is creation, too, but on a different scale. This is like a kind of digression for me, it’s another world.” She enlisted Goude’s expertise to add a sense of drama to the proceedings: the artist has designed the ‘Red Ballroom’, one of the rooms in the party that features a mobile of scarves blowing inside a giant cage, and directed the flamenco performance, which will take place in the music hall. He last collaborated with Hermès in 2000, for a New York store opening, but Barret has not worked with him before. She elaborates: “For me, Jean-Paul has a great sense of showmanship. I really wanted to do something that was entertaining, fun. He has a very special vision.”

The thinking behind these mega parties is three-fold. With the luxury industry stuttering the world over, it is no longer enough to simply open a store, stuff it full of collections and products first unveiled in Paris, and expect customers to come flocking. Hermès is one exception to the luxury downturn in China: in the first quarter of 2017, sales were up 16 per cent in Asia (excluding Japan). The house has strong presence here with 23 stores across China. Still, it understands the Chinese elite wants the exclusivity and excitement elicited by a catwalk show in New York, London, Milan or Paris – not to mention an opportunity to show off its Hermès Twillies and exotic Kelly bags. “[The Chinese customers] are super excited, they are in this discovery phase. Here, enthusiasm is strong,” says Barret. Secondly, the events makes good business sense: in the past, Women’s Universe events have stimulated a bounce in sales. As for the third reason? Barret shrugs. “It’s fun, non?”

The party space she has designed comprises nine rooms of custom-built set put together by Antoine Platteau. All are inspired by English gentlemen’s clubs, speakeasies, and sports societies, and function as a sort of super showroom for existing Hermès products. As we pick our way around ladders, cables and trays of pineapple (the Chinese prescriptive for soaking up the smell of paint and glue – it works), Barret calmly explains the guests’ progress: entrance via the ‘Lock Hall’, where giant barrel bolt locks (a key feature of the hit Verrou bag) on floor-to-ceiling doors open onto the ‘Chain Gallery’, filled with chain-handle handbags and a ‘Bangle Bar’, where faceless women wearing bangles will hand guests champagne. 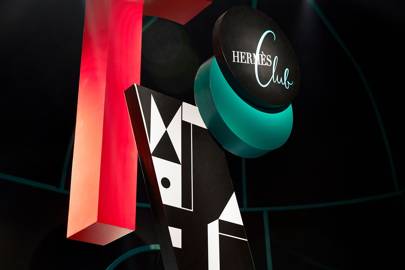 Next: a music hall, where there will be three performances given by flamenco dancer Rocío Molina and her troupe of 20 dancers and 7 musicians, all of whom are wearing the pre-fall 2017 collection. 30-minute-long performance over, it’s on to Goude’s red ballroom, filled with red shoes, scarves and perfumes; then the member’s room stuffed with jewellery; sugary pink powder rooms filled with accessories; a billiard room; a ‘valet service’, i.e. Instagram opportunity sat in a 12m-long racing car; and the night club. As 500 workers mill around us calmly drilling and gluing and spray-painting, Barret’s only anxiety tell is a packet of cigarettes tucked away in her Constance bag for which she frequently feels.

At 7pm on the night of the Hermès Club opening it becomes clear, if it wasn’t already, that this is no ordinary party. Certainly, it is not the modern version of a international fashion brand event, which is essentially a cocktail-party-come-branding-tool in which pictures of celebrity attendees are plugged around the world and fashion editors sip prosecco in the background. There are no celebrities here. Nor are there paparazzi. This is about good old-fashioned fun: a party for clients, with beautiful handbags as both backdrop and pretext.

Barret, elegant in a sky blue silk two-piece printed with the distinctive chain print, slips in to watch the first performance in the music hall. An exceptional piece of theatre, during which the dancer Rocío Molino dances like a demon on giant orange Hermès boxes, smashes a glass, and conducts a doll-like parade of dancers wearing fluid pre-fall 2017 silk scarf dresses, the energy in the room is palpable. On one box, a Spanish guitarists serenades her, on another trumpeters provide blasts and beats, frequently clapping to create a seductive, intense rhythm in traditional flamenco style. The guests are enthralled: Molino brings the house down.

Then it’s on to try endless platters of food, highlights of which include sesame and basil ice cream, extra aged comté cheese, foie gras and quiche (the chef is French, after all), washed down with Louis Roederer and cocktails. Each room brings to mind a different movie director: guests play Mikado and cards with girls with pink wigs in the powder rooms (decced out in Wes Anderson pinks and plush velvet seating); admire the swirling scarves in the red cage (Baz Luhrmann); and pose in the giant green motor car with the silhouette of an LA skyline sparkling behind them (Sofia Coppola crossed with La La Land’s Damien Chazelle).

When they aren’t having fun, attendees clock each others’ wares: I spot five Himalayan crocodile bags, which the PR informs me are extremely rare (not to mention among the most expensive). They have resisted the urge, however, to deck themselves out in cartoonish proportions. “Chinese women are super modern, super elegant,” Pierre Hardy, the principal shoe and jewellery designer for Hermès, tells me over a cocktail. “They have excellent taste, especially in the way they like to put outfits together. There is no bling.”

In the billiards room, where a raucous game of bowling billards is unfolding, Barret has climbed onto the giant billiards table, to cheers from her team. She bowls a white billiard ball, which promptly clinks into one of the giant pockets without knocking any others in en route. She throws up her hands and laughs. “Very funny,” she says, a pet phrase.

It reminds me of something she said yesterday: “What is Hermès? What is not Hermès? It is intuitive. Hermès is about unexpected things, surprises, not a dogma. There are no rules.” Except, however on the billiards table. One strike and you’re out.

Posted by FASHIONmode News at 5:04 PM