Sienna Miller has publicly joined Instagram. The self-confessed social media luddite, who is notoriously private about her personal life, launched her account @siennathing with a profile description that reads "Marlowe’s mama" on June 12. Overnight it amassed some 5,000 followers, and at the time of writing has already reached over 60,000.

For her Instagram debut, Miller posted a black-and-white photograph of herself wearing Dior’s spring/summer 2017 catwalk hit, Maria Grazia Chiuri’s "We Should All Be Feminists" slogan T-shirt. The 35-year-old actress holds up her hands in a Star Trek-inspired salute, with the word "greetings" scrawled across her palms. The caption reads: "Hello World Wide Web #givin #peerpressure #luddite." 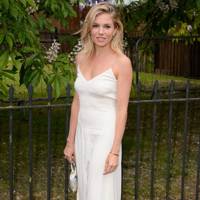 Miller’s second Instagram post was a poster for her upcoming theatre production, Cat on a Hot Tin Roof, which opens at London’s Apollo Theatre on July 13 for a 12-week stint. Her third, a selfie of herself and friend Cara Delevingne, captioned with an in-joke, "There's only one Shnoyster".

Though Miller has private social-media accounts for friends and family, @siennathing is the first time the Vogue cover girl has openly invited the public to share insights into her life.

Miller has already been active following other Instagram users, such as Barrack and Michelle Obama and Bernie Sanders, as well as ex-partner Jude Law’s former wife Sadie Frost, and his two eldest children Rafferty Law and Iris Law. It’s only a matter of time before that blue tick – the holy verification badge – appears on @siennathing’s profile.

Posted by FASHIONmode News at 11:03 AM