Raf Sweeps Up At The CFDA Awards

Raf Simons scooped the Menswear and Womenswear Designer of the Year awards at the CFDA Awards last night for his work at Calvin Klein, less than a year after he was appointed chief creative officer at the New York-based label. The celebration of talent continued with Laura Kim and Fernando Garcia picking up the Swarovski Award for Emerging Talent for their label Monse, and Demna Gvasalia taking home the International Award for his work at Balenciaga and his own label, Vetements.

Elsewhere, esteemed members of the fashion community were honoured, including Kenneth Cole, Rick Owens, and Pat McGrath; Cecile Richards, Gloria Steinem and Janelle Monáe were awarded the Board of Directors Tribute; and Franca Sozzani was honoured posthumously with the Fashion Icon Award. American Vogue editor Anna Wintour presented Sozzani's award to her son (and Wintour's son-in-law-to-be), Francesco Carrozzini, after giving a moving speech about her colleague and friend. 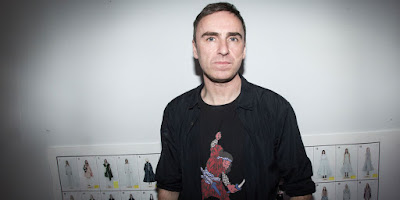 "An eye for romance was one of Franca’s editorial gifts," said Wintour, "But it was far from the only one that shaped her point of view. Franca’s deep imagination drew on drama, irony, history, ambition, and a feeling that fashion meant more than clothes on a runway. She was fearless too, imbuing Italian Vogue with deep, often controversial, moral purpose. Think of her portfolio on domestic violence. Or her pioneering issue featuring only black models. Or her plus-size cover. She was not just ahead of our time. She was ahead of our courage, in so many ways.

Posted by FASHIONmode News at 6:44 PM