Topman's Gordon Richardson On The Art Of Collaboration

Gordon Richardson uses the word "We" a lot. While it is him that presides over Topman as its creative director, his delight in collaboration is clear in everything he does. From working with Luke Day on styling the Topman Design shows that have become a central fixture of London Fashion Week Men's, to his work with Lulu Kennedy’s MAN initiative that has birthed and nurtured some of the city’s brightest new menswear talents, he is keen to assert there’s no "I" in Topman. Ahead of the presentation of Topman Design’s spring/summer 2018 collection shown today, we took time to reflect at Topman’s London HQ.

“We are about collaboration and I like bringing people into the mix, I think it’s important," Richardson told us. "With a brand like Topman, you could just think as a high-street retailer or you can have people who think outside of that and work and collaborate with us and change what we do. We’re a better brand by having people we respect come in, like Luke who can contextualise it better than me and make sense of it better than myself and my team can.”

This collaborative prerogative will be put into practice today at the brand's presentation, where instead of its holding usual catwalk presentation, it will launch Transition; a multimedia event held in the Truman Brewery that will then be opened to the public (who can obtain tickets via the Dice app) over the weekend. At the centre of the event sits a carefully edited core selection of 15 looks that takes its inspiration from London’s post-punk party landscape: “That sort of dressing-up moment in the Eighties that was built around the Blitz club and stepped out of alignment with things that existed at the time," explained Richardson. “We then came up with the idea that we would do this event and have collaborators who would contribute and summarise Topman Design in their own way”.

These include the poet Max Wallis, whose exploration of love, youth and masculinity chimes well with Topman’s catwalk characters who have long wandered comfortably through countless eras and locales. For Transition, Wallis has put together a film that takes the idea of the myriad ways men can simply say "I love you."

Men’s fashion in London has felt a lot of love lately and, while London Fashion Week Men's kicks off its tenth season today, it is a universe that Richardson has been a celestial body in from the start. “It’s become something else now hasn’t it?” offered Gordon. “It’s become a thing”. 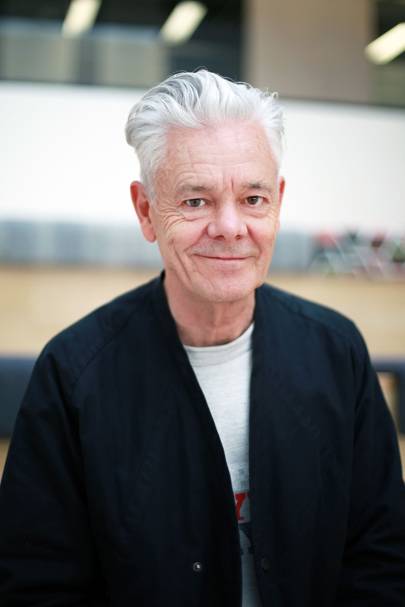 The week originated as a single day following the women’s collections of London Fashion Week, centring on Lulu Kennedy’s MAN initiative promoting three emerging designers each season in a similar format to her widely admired Fashion East initiative for womenswear. “I remember Lulu coming into this office many years ago and I remember the meeting room it happened. She passed us in another room and she said ‘Hey, why don’t we do men?’ and so we said ‘Fabulous, we’ll do it.' It was the most pioneering, exciting thing to be doing, watching MAN mature and those designers come to fruition."

While Topman sponsors MAN, Richardson is also a member of the panel that selects the designers whose alumni are a cross-section of London fashion talent from now-established names like JW Anderson, Christopher Shannon and Craig Green to new darling Charles Jeffrey.

“Somebody like Craig is the most perfect example. I mean he was pretty together right from the beginning, of course he was, but to watch him grow and watch him build his audience to that point that he could then take off.” But Gordon is keen to think long term with these talents and wants to protect a creativity that can too often prove fragile. “Some of them want to rush and you need to hold them back a bit and allow them to grow and I think that nurturing thing is very, very important. We have never just said 'Right, who’s the next thing?’"

And with that, he’s on to his own next thing to humbly and brilliantly help men across the land get dressed.

Posted by FASHIONmode News at 10:34 AM