Mario Testino  has been awarded Chevalier de la Legion d’Honneur. The ceremony took place last night at the French residences in Lima, capital of Testino's native Peru and was witnessed by close friends and family.

The famous photographer, whose work frequently appears in the pages of British Vogue, was awarded France's prestigious honour for his services to culture during his career (which has spanned over 40 years) as well as his philanthropic work through his cultural foundation in Peru.

"France is happy to show its recognition today to a person who, despite living under the brightness and the warmth of the planet, contributes to the development of young Peruvians as well as to the appreciation of the art and cultural heritage of their nation," said France’s ambassador to Peru, Fabrice Mauriès. 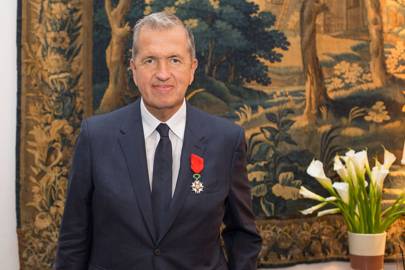 No stranger to awards and accolades, the fashion favourite was recently awarded the Fashion & Beauty Lifetime Achievement Award at the 2016 Clio Awards.

"It's important for all of us to receive accolades because the children in us never leave us," he told us at the time. "As a child, if you do something that you're told is good, then you want a prize, and accolades are like our prizes. It's the way that we feel that something is recognised, that we've done something right and I think all of us like that."
Posted by FASHIONmode News at 11:01 AM