If the last year has proven anything, it’s that the Kardashian-Jennersisters have a healthy appetite for vintage fashion, particularly the kind that comes with a logo. Kim repopularised the throwback logo bikini, and Kourtney and Kylie have decked themselves out in head-to-toe monogrammed Fendi. And let’s also not forget KKW’s Tom Ford for Gucci G-string. But where does it all come from? In October, Kim Kardashian West posted a photo on Instagram Stories featuring two pairs of vintage Dior sunglasses and a white Dior logo baby puffer coat, with a caption that read: “OMG my fave vintage spot @reinvintagecollection.” Never heard of it? We hadn’t either. But a little sleuthing revealed this: Rein is the brainchild of Zena Bryant, a native of the south side of Chicago who is fairly new to the resale and fame games.

Though her entire life is now dedicated to sourcing covetable monogram fashion, the 31-year-old Bryant wasn’t always in love with vintage. “I remember my mum dragging me to the thrift store when I was little and I hated it. The smell and the thought of wearing other people’s clothes was baffling to me,” Bryant says. “The more we went though, I became amazed at the pieces my mum would find. I started searching and getting such a rush from the treasure hunt. My first vintage item was an MCM bag. The feeling I got when I found it is the same feeling that I get and I chase to this day.” Once Bryant began to cultivate her passion, she eventually started collecting at various shops around Chicago. Now, stores and independent dealers in New York and Los Angeles are on her circuit. She opened a brick-and-mortar shop in her neighbourhood a few years back but quickly discovered that Instagram was a far more profitable and visible place for her business. 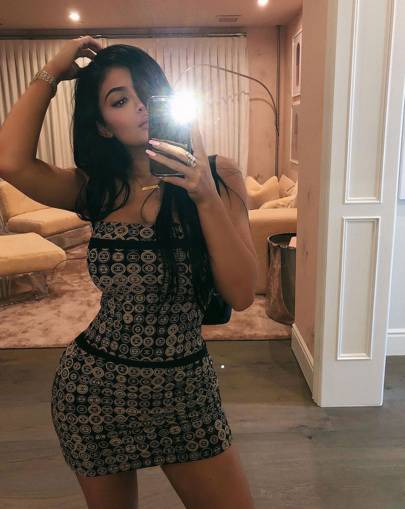 Beyond the Kardashian-Jenner girls (she just sent Khloe a Dior onesie for True), Bryant has also recently worked closely with Cardi B, Quavo, Teyana Taylor and Demi Lovato, all of whom came to her after one chance virtual encounter. “Law Roach, who styles Céline Dion and Zendaya, reached out to me via Instagram in 2016,” Bryant explains. “After that I met stylist Krystle Kastlez, who has worked with Pharrell and Selena Gomez. She purchased a Valentino slip dress from me and we’ve become very close friends.” Another close friend is KNC Beauty founder Kristen Crawley. “She was the one who introduced me to Kim and her family,” Bryant says. “Kristen wore a Fendi piece from Rein on vacation with the Kardashians and they loved it and wanted to know where to buy.”

The majority of Bryant’s business comes from these kinds of insider referrals. Celebrity stylists frequent her account because it’s a one-stop shop for the most popular designer vintage at the moment, whether it’s a Prada nylon fanny pack, Dior logo sunglasses, a Fendi baguette, or a monogram bikini. “This all happened overnight,” Bryant says of her social media success. “It’s a hard business and when I had the shop I thought about giving up, but now it’s booming. Seeing the looks on my customer’s faces when they wear something from Rein, as well as seeing how they style it, is priceless.”